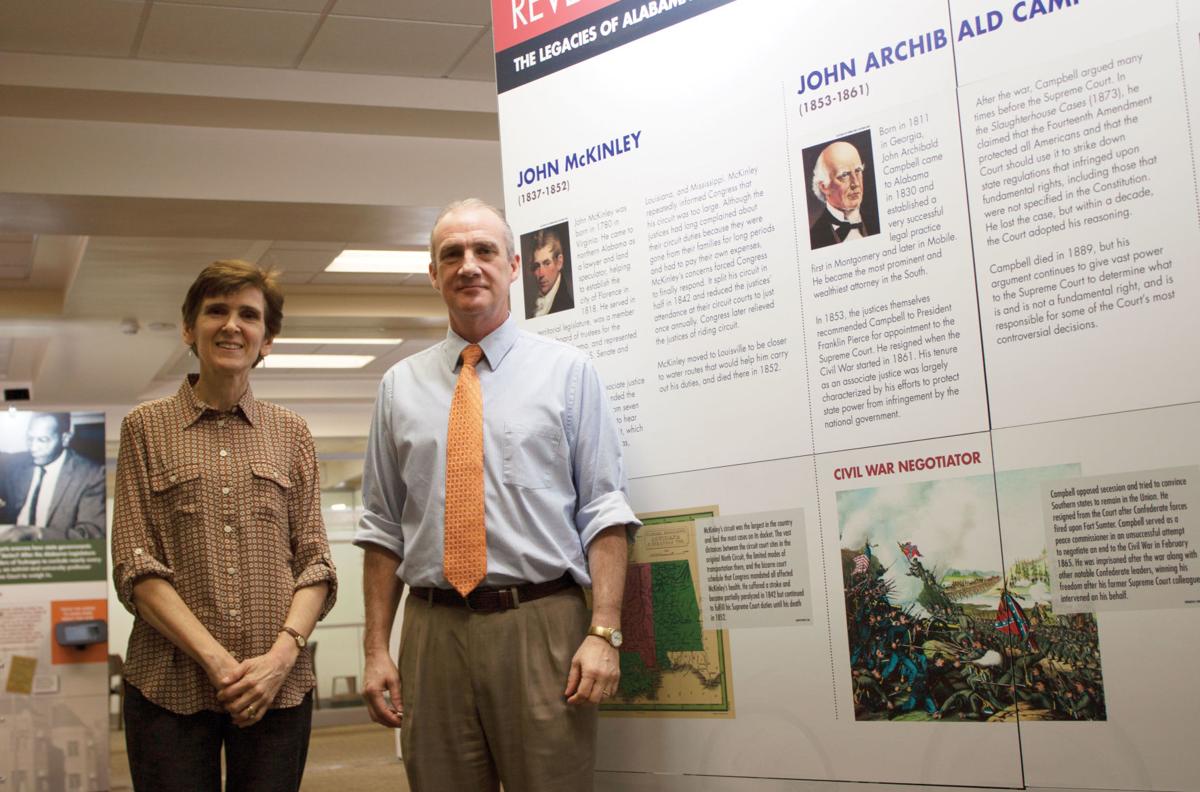 Professor Steven Brown, right, stands with Auburn University librarian Liza Weisbrod in front of an exhibit panel for "Alabama Justice: The Cases and Faces that Changed a Nation." The exhibit is on display at the Ralph Brown Draughon Library's first floor until Feb. 8. 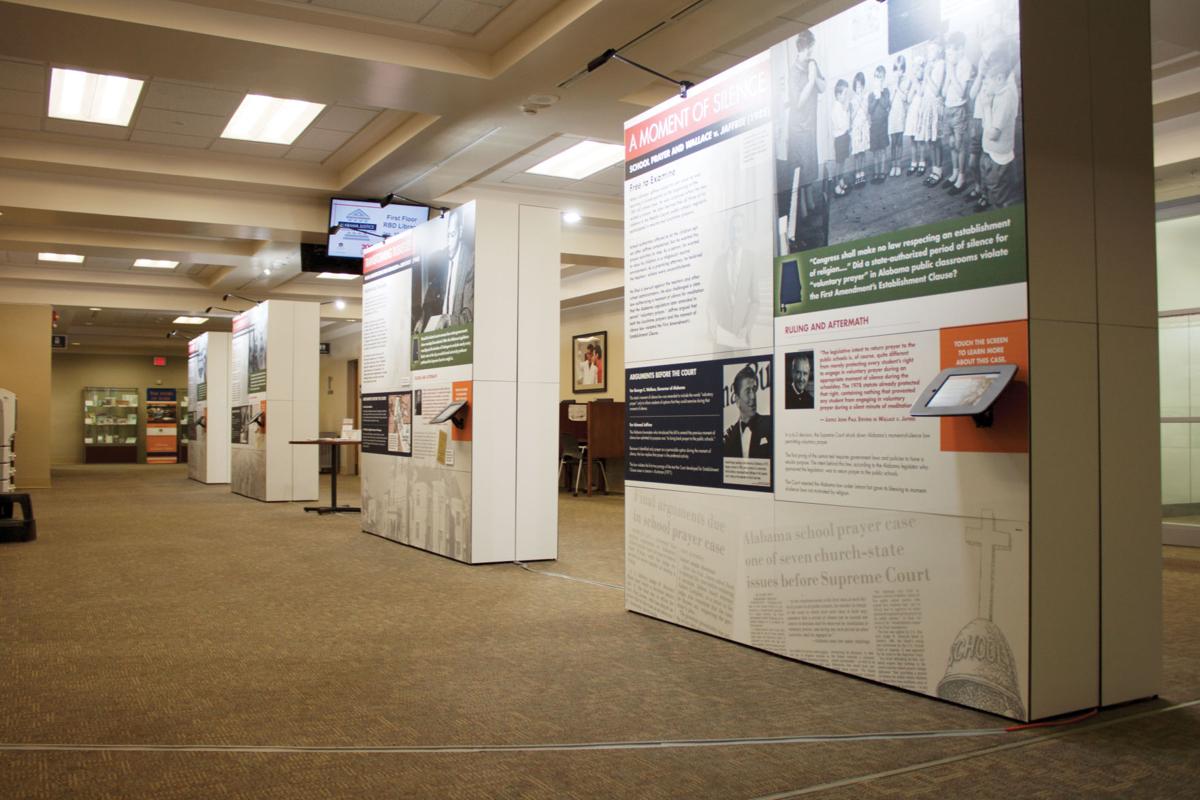 Professor Steven Brown, right, stands with Auburn University librarian Liza Weisbrod in front of an exhibit panel for "Alabama Justice: The Cases and Faces that Changed a Nation." The exhibit is on display at the Ralph Brown Draughon Library's first floor until Feb. 8.

When Steven Brown began working at Auburn University in the late '90s, after moving from Virginia, he was surprised at the rich history he discovered here, particularly regarding court cases.

Brown, a constitutional law professor, teaches about 90 landmark Supreme Court cases in his classes each semester, but he remembers being surprised at how many of those cases originated in Alabama.

To showcase just a handful of them, an exhibit created by Brown is currently open at the Ralph Brown Draughon Library. The exhibit, "Alabama Justice: The Cases and Faces that Changed a Nation," was developed for the Alabama Bicentennial and will travel throughout the state through 2021 in an effort to help Alabamians realize their history. Auburn is its first stop.

"(The exhibit) gives brief treatments of the cases, but we hope that it makes people think, 'Oh, that's interesting,' and then they Google them and learn more information and realize two things — that this stuff happened; these were important cases and still are; and that these rights that were established are still important today and that they need to be protected," Brown said. "They need to be aware of these, and they need to protect them."

Eight cases are featured in the exhibit as well as three Supreme Court justices who were from Alabama — John McKinley, John Archibald Campbell and Hugo L. Black.

"The most recent is Hugo Black, but (people) don't even know him anymore, and that's a shame because the justices made some very important contributions," Brown said.

The cases featured include Powell v. Alabama (1932), which established the right to effective counsel for those in the criminal justice system; Frontiero v. Richardson (1973), a women's rights case and current Supreme Court Justice Ruth Bader Ginsberg's first case to argue in front of the Supreme Court; and Gomillion v. Lightfoot (1960), in which the court became involved in the drawing of the municipal boundary lines in Tuskegee to protect the voting rights of African-American residents, who were being drawn out.

And that is just to name a few.

Brown said one of the most well-known may be Powell v. Alabama, in which nine young black men were accused of raping two white women.

"It was just a horrific case, but it establishes this right to counsel and your right to have an attorney. Anybody in any aspect of the criminal justice system today owes their right to counsel to that court case," he said.

The women's rights case, Frontiero v. Richardson, was important in many ways, he said, and it set a precedent for other gender-related cases.

"These cases were all important for what they did at the time and then the foundation they laid for other cases in the area," Brown said. "Everybody benefits from that.

"People need to care because if you take this away, then what do you have? Take these precedences away and would they be established anyway? Probably, but who knows? There is a lot of other case law in other states that is important, but I just think the breadth of this, coming from this state, is just super important."

So, why did so many landmark cases originate in Alabama? For Brown, two thoughts come to mind.

"One way to look at that is, man, this is just a bad place," he said. "To have all these court cases to straighten us out. But, none of these are unique to Alabama; they happened to be litigated here, and that may be because people had the guts to stand up for it here. That's another way to look at it. People said, 'We're just not going to take it anymore down here.' I think that's a positive spin."

Although the exhibit is at the campus library, it is open to the general public as well as students. Those who come can find it on the first floor of the RBD Library, near the parking deck entrance.

The exhibit features 11 large panels with photos, quotes and summaries of the cases and information about justices. Each panel features an interactive iPad Kiosk, where viewers can scroll through legal precedents for each ruling, listen to clips of the actual oral arguments that came before the Supreme Court and read more about each ruling.

The exhibit will remain open at the library until Feb. 8, when it will be disassembled and moved to Birmingham — its next stop.

As visitors are in the library, they can also check out a book display that features further reading on the topics presented in the exhibit. The book display can be found on the second floor near the classroom entrance to the library.

To follow the exhibit, find travel dates and locations at alabama200.org/AlabamaJustice.