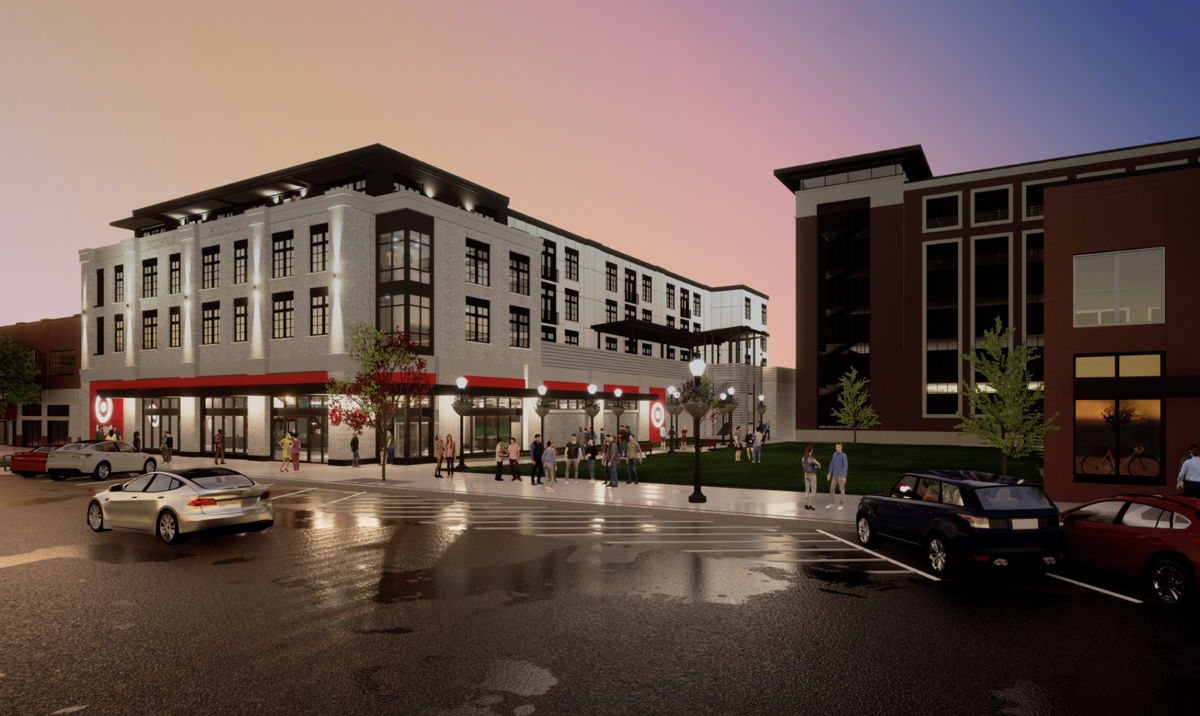 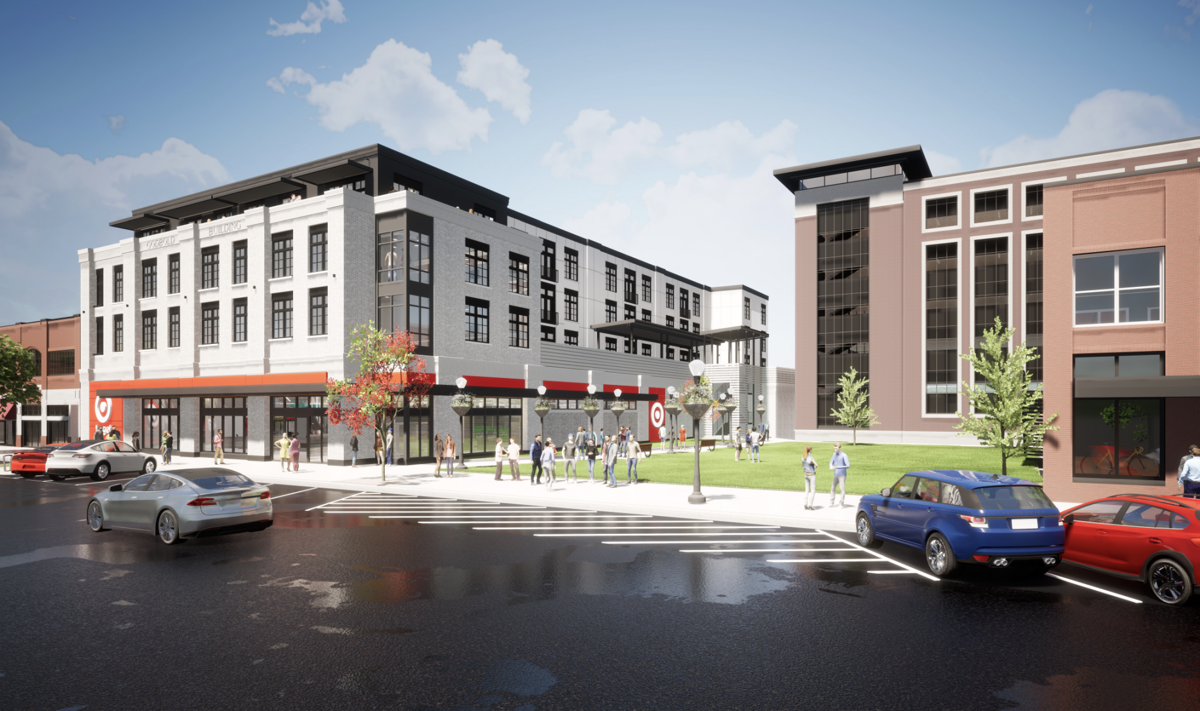 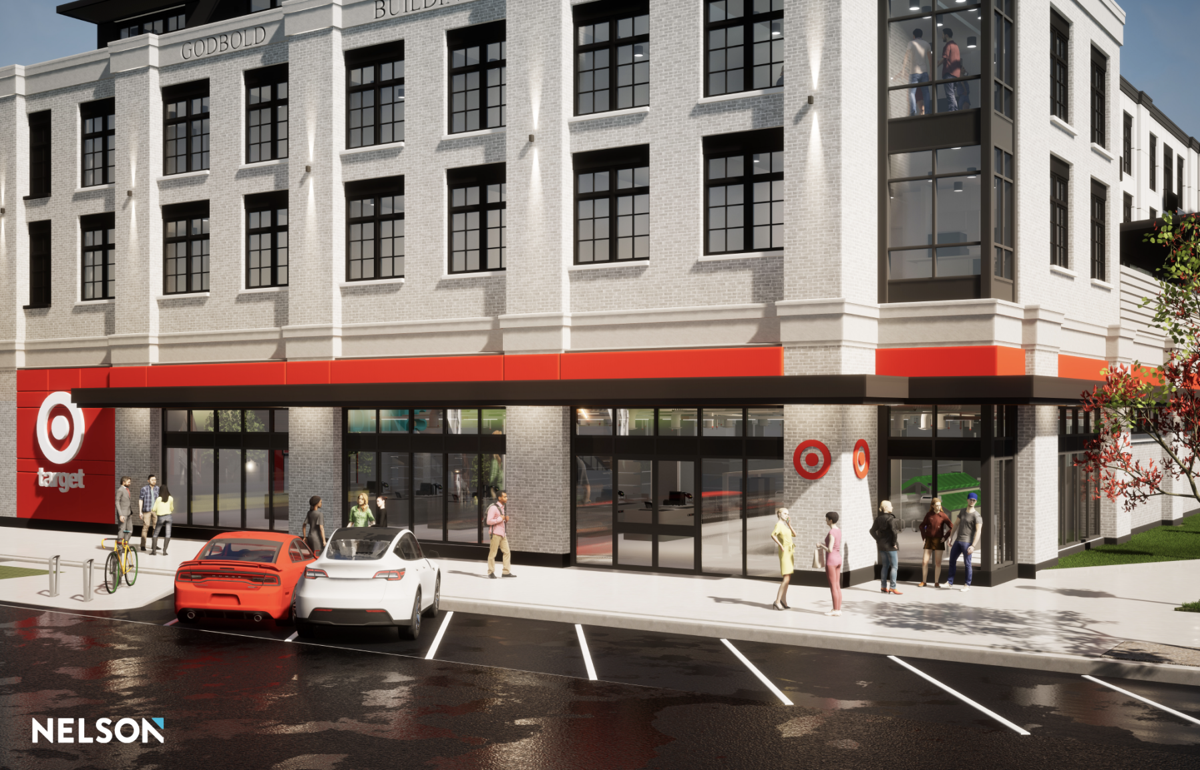 The developers of the Godbold Building announced on Tuesday that a Target will be part of its mixed-use project, which came before the Downtown Design Review Committee for the second time.

Property owner Chris Godbold said he received approval at the last minute before Tuesday's meeting to announce Target as the ground-floor retail tenant.

The Godbold Building, which will be located at 129 N. College St. next to the Wright Street Parking Deck, will feature a Target on the ground floor and 32 market-rate apartments on floors two through four, most of which will be two-bed, two bath units. That's a substantial reduction from the 110-plus apartments originally planned.

The mixed-use development went through substantial changes since it first came before the DDRC in May, with the overall height of the building dropping from 75 to 55 feet, the design replacing the previously required red brick facade for white brick, and the removal of a parking deck for a residential surface parking lot along Wright Street. At its first meeting to review the project, DDRC members voiced concern about the building height and the facade facing North College. The current iteration of the project addressed those concerns.

"What we really wanted to do, after receiving some feedback, was really right-size the project," said Godbold, who will retain ownership of the building once it's completed.

The main driver for the reduction in the project's footprint was the skyrocketing cost of raw materials, including lumber, during the summer, as well as the desire to have the building fit in better with the character of North College, said Godbold.

"I think this is such a big improvement over the last submission," said Hinson. "This is all done in the spirit of trying to make it as good as it could possibly be."

All three of the DDRC members, including Anna Solomon, liked or didn't voice opposition to the use of white brick on the facade, which Godbold said was inspired in part by the piano-like feel created with the black-and-white facade. Godbold also drew upon the prior experience of developing Southeastern, of which he is a part-owner, in downtown Auburn.

"I think a lot of the changes that we made between the last DDRC submission and this one involved really looking at it through the lens of local knowledge and the fact that we've owned properties and businesses in downtown for nearly 20 years now. We wanted to find something that fit in or just felt like it's always been there. We received a lot of compliments from our Southeastern project. As you know, the buildings on either side of that building are over 100 years old, and that one's only three years old. But people like the way that it blended in and we wanted to take that same feeling theme with this project."

The DDRC made some further suggestions at Tuesday's meeting — making the walkway that cuts between the Wright Street Parking Deck and the Godbold Building as pleasant as possible, with good lighting, and minding the character of the window choices for the upper levels, among other minor suggestions.

"I think the whole community will be a lot happier with this proposal," said Hinson.

The project is expected to break ground in mid-January, with a target date for completion by in the spring of 2023.