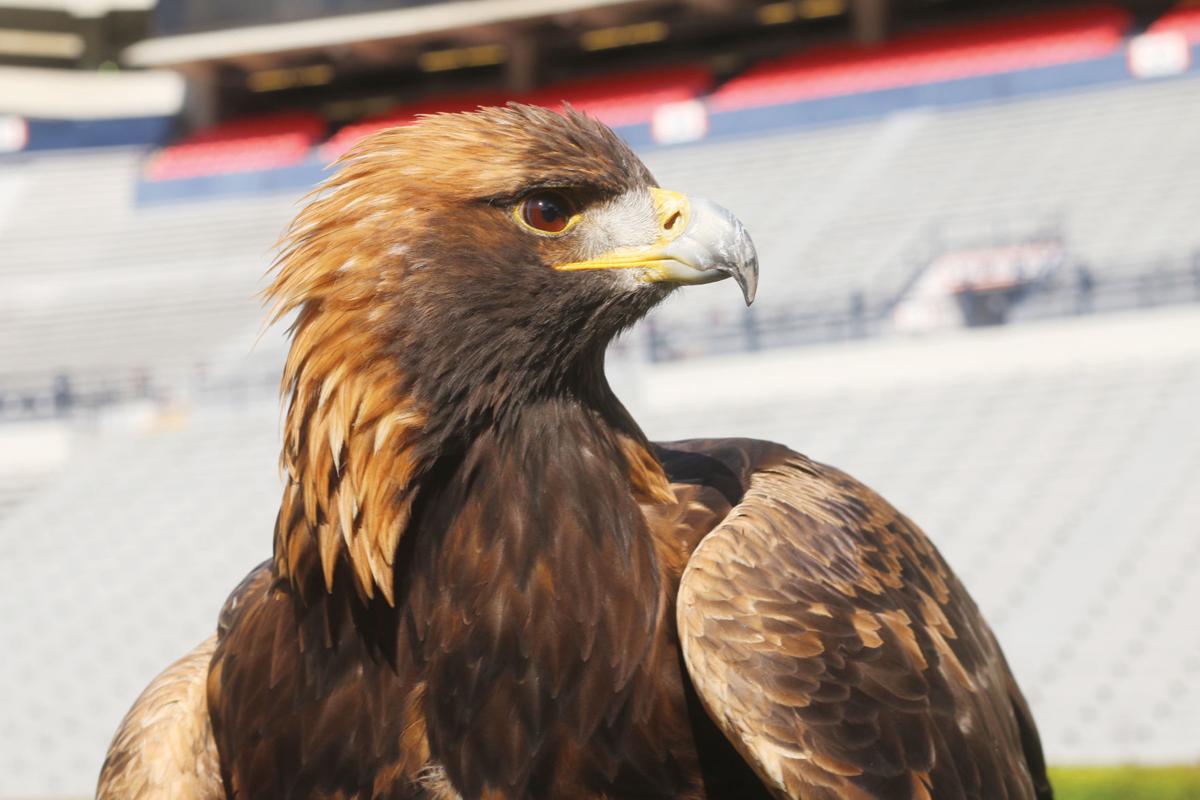 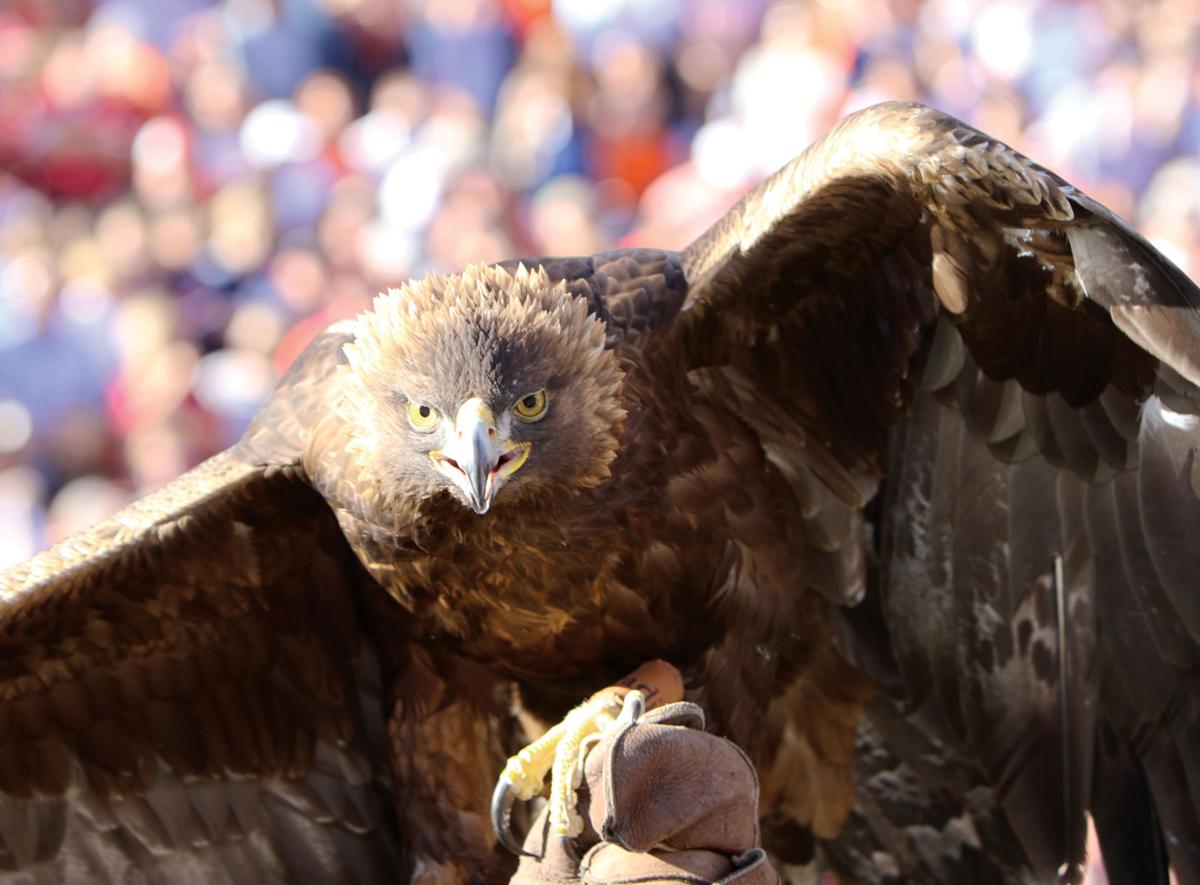 Nova in 2016, the year before he was sidelined from flying during pre-game festivities due to a heart condition 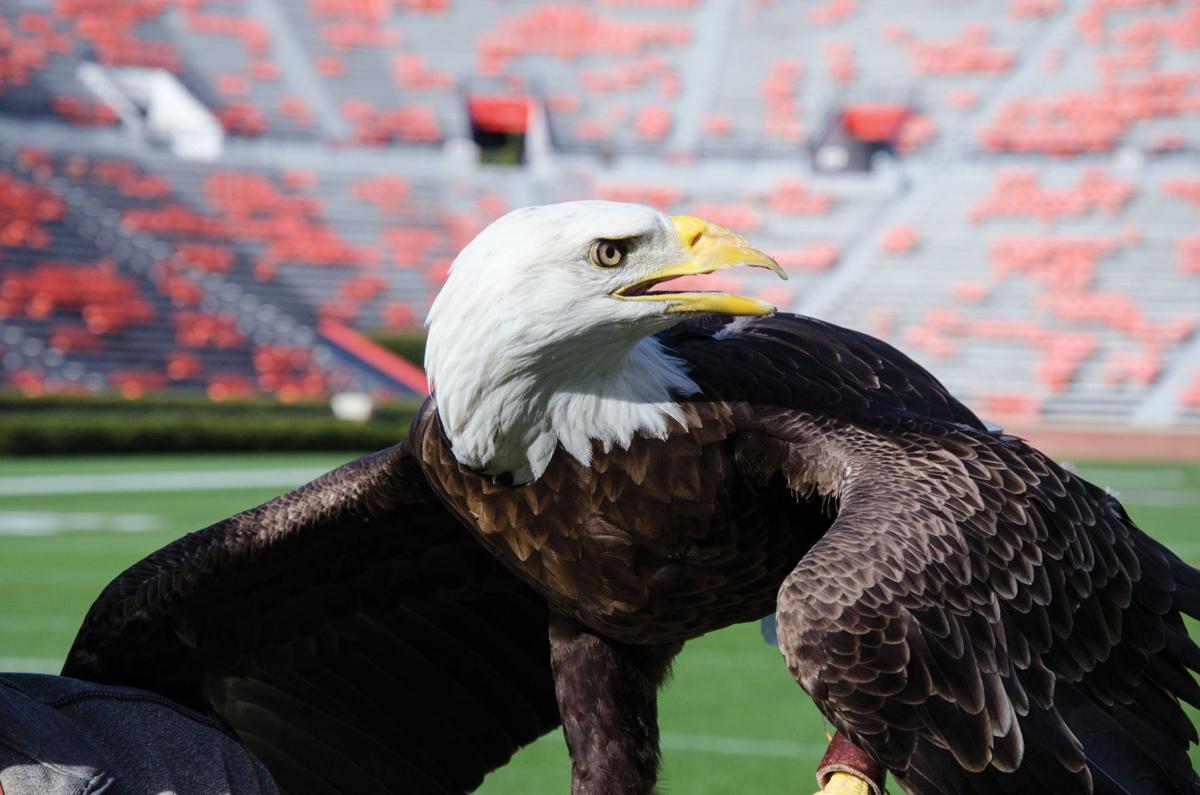 Nova in 2016, the year before he was sidelined from flying during pre-game festivities due to a heart condition

A staple of one of Auburn’s most memorable pre-game traditions will again be missing from the field this year.

Nova, the university’s beloved golden eagle, will be sidelined for a third season after being diagnosed with cardiomyopathy about two and a half years ago.

“(Nova) had arrythmia, which was an abnormal electrical pattern in his heart. There’s a major artery that comes out of his heart that feeds his right wing, and that artery had about a 90 percent blockage,” said Seth Oster, primary veterinarian at the Southeastern Raptor Center, which has treated Nova since his diagnosis.

Over the past couple of years, Nova has steadily improved and seems to be enjoying life outside of the spotlight, Oster said.

“For now, he’s still sidelined. He’s resting quite comfortably, and as far as Nova is aware there’s nothing wrong with him,” Oster said. “He gets meals twice a day; he gets fed seven days a week. He doesn’t have to live the life of an athlete anymore. He gets to have a nice, cushy time.”

Because Nova was born in captivity, he cannot be released into the wild, something Oster said should actually prolong his life.

“Captive raptors can live much longer than their wild counterparts,” he said. “We were at the point with him where old age diseases like arrythmias would be something that would cause him a problem in the wild, and he probably would have died in the wild if he didn’t have anyone to intervene.”

Nova, born in 1999, has flown in 58 games since he started flying in 2004. Like the other raptors, he still participates in educational events throughout the year.

“The only reason we have these eagles is for education,” said Andrew Hopkins, assistant director of raptor training and education. “Nova and all of our eagles continue to do those educational shows. Even if, and when, he gets retired, he’ll still do lots of educational shows each and every year.”

Hopkins, who has worked at the center since 2012, said there is a lot of preparation leading to the eagles flying around the stadium on gameday.

“Everything we do is positive reinforcement. So, they’re coming to us for food — that’s their reward,” Hopkins said. “They’re trained to come to a leather lure… On gameday, they’re looking for us to show them that lure.”

Nova’s counterpart Spirit, a bald eagle, has flown in the stadium since 2002. She continues to practice every day to prepare for football season.

“Monday through Friday we’re in the stadium, she’s coming to that lure,” Hopkins said. “She’s practicing so on gameday it’s just another practice for her. It’s just 90,000 people happen to be watching.”

But Spirit won’t have to continue the tradition by herself.

Last year, a golden eagle named Aurea made her debut when the Tigers took on Liberty. Prior to joining Spirit, she had to complete an intensive two-year training process.

“Before they get to that point, we’re just working with them on the glove, getting them around people, taking them to lots of shows and just sitting them up there on the ledge around the stadium. We’re still taking them on gamedays so that they’re used to all that noise and the people there,” Hopkins said.

He added that there is another bald eagle currently in the early stages of the training process.

While the eagle has been a symbol of Auburn since the 1800s, the tradition of eagles flying around the stadium is relatively new.

“Eagle flying didn’t actually start until 2000 with Tiger, War Eagle VI, and that was really only from the end zone to the 50-yard line,” Hopkins said.

Since the main purpose of having the eagles is education, Hopkins said a stadium of 90,000 people is a perfect way to raise awareness.

“The amount of education we can do about eagles in the stadium is a lot,” he said. “The bald eagle used to be endangered; luckily, they’re no longer endangered. I know that all Auburn fans don’t want anything to happen to bald and golden eagles in the wild because they’ve got that connection with them because of those stadium flights.”

The eagles in the care of the SRC are non-releasable and belong to the U.S. Fish and Wildlife Service, Hopkins said.

“Usually, non-releasable eagles have some kind of wing problem or an eye problem. We’ve been fortunate to have eagles that are capable of flying in the stadium despite their injuries, but that’s not always a guarantee,” he said.

All of the lures used during the pre-game flight are auctioned off after each game, Hopkins said. Each lure is uniquely painted, and people can bid online at auburn.edu/raptor.