The DDRC was tasked with reviewing and updating the standards as part of its mission and began work on draft regulations in January 2020. The DDRC met numerous times last year, mostly virtually, to craft the regulations, including in three joint work sessions with the Planning Commission, which recommended approval of the amendments to the zoning ordinance by a 7-1 vote at its regular meeting in April. The City Council will consider the amendments at its meeting on May 18.

Planning Department staff also met with stakeholders (architects, civil engineers) four times from December 2020 to February to get feedback on the proposed changes. City staff and the DDRC also relied on benchmarks set in other cities, including Mobile, Chattanooga, Tennessee and others.

Proposed revisions cover a wide range of standards, including those for building mass, facade composition, fenestration and story height, among others. Many of the revisions shift slightly depending on which of the three areas  (shown above) the property resides.

“We’ve kind of looked at these as three distinct areas with unique character features,” said planner Logan Kipp during the presentation. “It’s kind of unique urban environments, with the ‘A’ area being the traditional urban core, Toomer’s Corner, largely commercial development. ‘B’ area is kind of transitioning to mixed-use residential and commercial, and the ‘C’ areas typically being largely residential, mixed between infill single-family and student housing, essentially.”

The revisions do not change allowable building height, but do address story height. The minimum ground floor story height proposed for non-residential uses is 18 feet, with minimum story height for the second story and above set at 10.5 feet, floor to floor.

Where ground-floor residential is allowed (roughly in areas B and C), minimum ground-floor story height would be 15 feet.

Another significant revision would affect fenestration, which the city defines as “the arrangement of windows and doors on the elevations of a building and their associated level of transparency.”

The proposed changes would require a higher percentage of glass than before for the A and B areas. In the A area, the minimum glass fenestration would rise from 30 to 50 percent for the ground floor, with the minimum for the second story rising from 20 to 30 percent. Upper stories would remain the same, with a 20 percent minimum.

The C area minimums would remain the same at 30 percent ground floor and 20 percent above.

The benefit is to increase the overall fenestration, said Kipp in response to a question by Mayor Pro Tem Beth Witten.

“We’re trying to allow more glass,” said City Manager Megan McGowen Crouch. “We’re not going Germany-style with full-glass buildings yet in Auburn, but at the end of the day we actually had pretty hefty restrictions on glass the were limiting design.”

The proposed revisions would also remove some of the cladding materials that were strictly prohibited downtown, including removing the requirement for red brick.

“Not every building needs to be the exact shade of red brick, and (we’re) allowing a little bit more flexibility there,” said Kipp.

The proposed revisions would also require, for a building 100 feet or longer, at least 70 percent of the ground story fronting the street to be an active use, with a maximum of 50 percent of that allotment dedicated to amenities. The other 30 percent could fall into the “other” use category for things like garages, service entries or mechanical rooms.

A revision offered by the Planning Commission would reduce the parking requirement for studio or one-bedroom units to one parking space, but set a 1.5 space per unit requirement for those units with two or more bedrooms.

The revisions would also set the maximum street-facing building length at 240 feet; require articulation in building height and facade for those structures 100 feet or more in length; and set new parking lot screening standards.

While the Planning Director would retain some ability to allow minor allowances to developers, waivers of the proposed development and design standards would be reviewed by the Planning Commission, which could request that the DDRC also provide a recommendation. 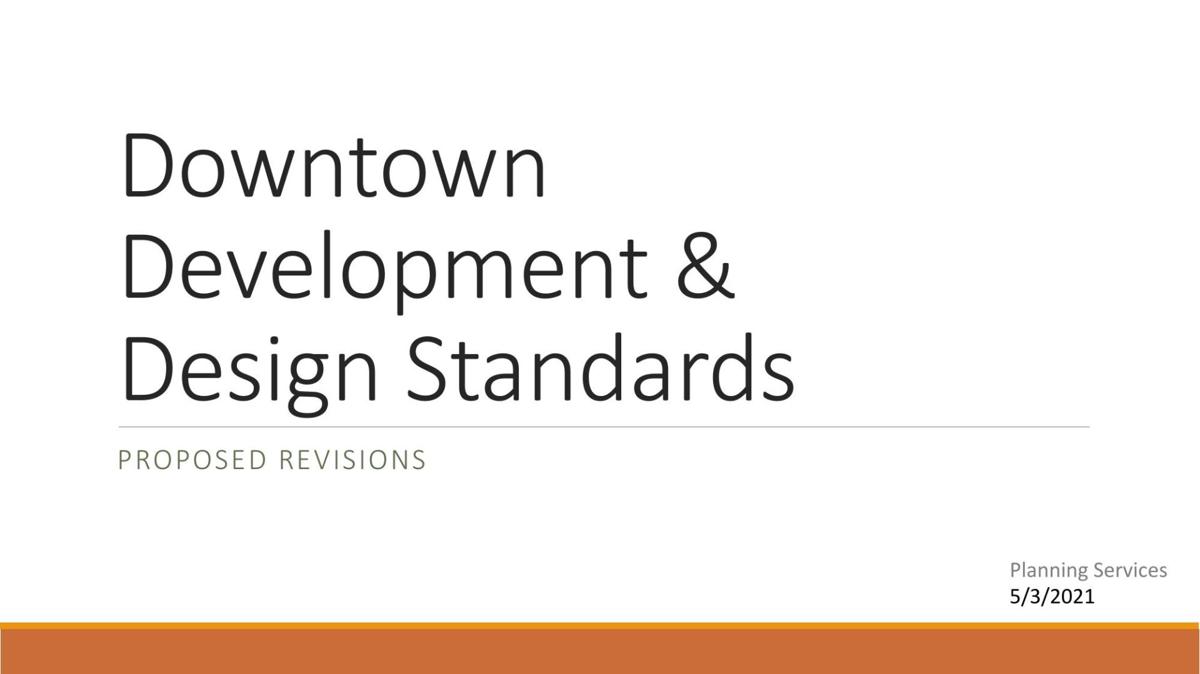