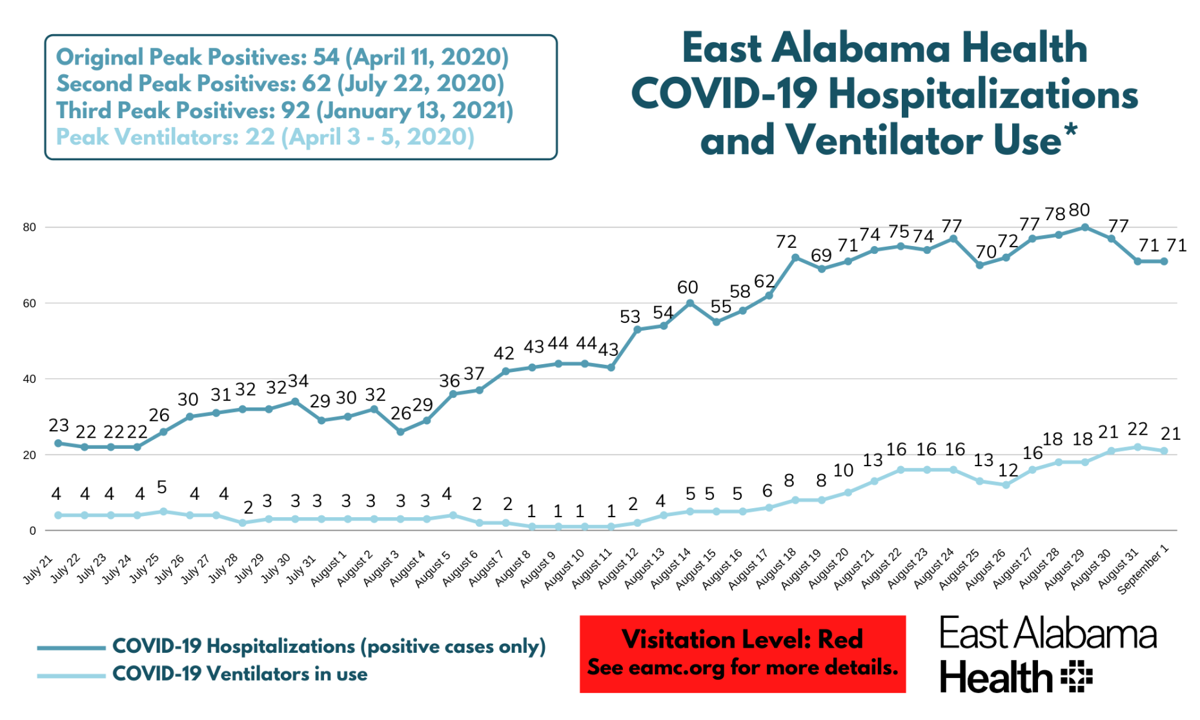 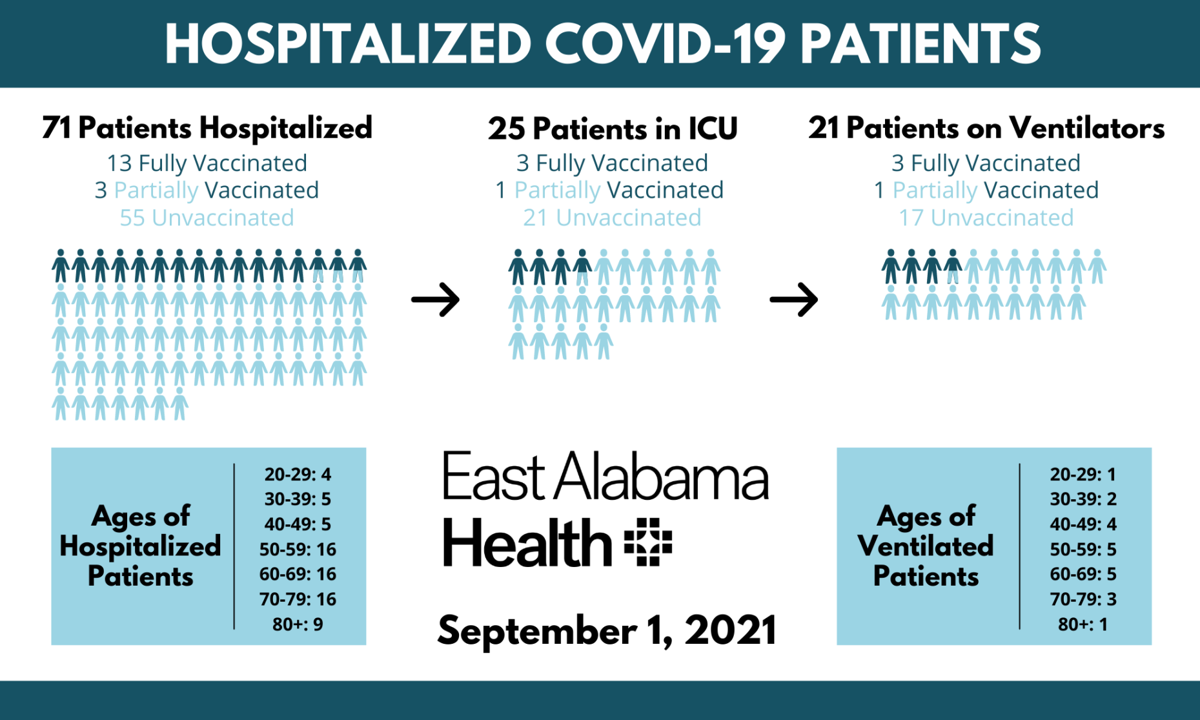 The situation at East Alabama Medical Center and EAMC-Lanier is becoming more dire as the recent surge in Covid-19 hospitalizations has brought hospital services close "to the brink" of demand outpacing supply.

As of Wednesday afternoon, 71 patients were hospitalized with Covid-19 at EAMC, with 25 patients in the ICU and 21 patients requiring intubation. That is one short the hospital system's pandemic peak in patients on ventilators, which occurred between April 3-5 in 2020 and again on Tuesday.

While the highly contagious Delta variant continues to spread throughout the community, the recent surge of hospitalizations locally is largely among the unvaccinated. Of the 71 hospitalized patients at EAMC and EAMC-Lanier as of Wednesday, 55 are unvaccinated, 13 are fully vaccinated and three are partially vaccinated. The same holds true with patients in the ICU or on ventilators, with the unvaccinated accounting for 21 and 17 of the patients falling into the two respective categories.

"Due to this surge in Covid cases, our employees and physicians throughout the organization are being asked to do more than ever before — and some in departments to which they were reassigned,” said John Atkinson, East Alabama Health spokesman, in a news release. “Like other hospitals, the demand here is on the brink of outpacing the supply. There’s a finite number of hospital beds and supplies in every community and every state; you cannot simply ramp up production to make more. And even if you could, the number of healthcare workers to staff beds, answer calls, conduct tests and perform other tasks are in equally short supply right now.”

While the number of people being vaccinated has ticked upward since the Delta variant became the dominant strain in the area, Lee County's vaccination rate for those eligible still lags well behind the national average.

Currently, there are three vaccines in the U.S. that have received either full or emergency approval from the U.S. Food and Drug Administration. The Pfizer-BioNTech vaccine has been given full FDA approval for those ages 16 and older. The vaccine, which has been branded as "Comirnaty," has emergency use authorization for those ages 12-15. A vaccine for children ages 5 to 11 could come by the late fall or early winter, according to Dr. Scott Gottlieb, a Pfizer board member who recently spoke with CNBC.

" The product has not changed,” said Chuck Beams, executive director of Pharmacy Services for East Alabama Health. “It’s now FDA approved and is allowed to have an official brand name.

" As the vaccine hit the headlines in December 2020, the common manufacturer name stuck, and the vaccine was immediately known by “Pfizer” instead of the odd string of letters and numbers from its research name."

Full FDA approval for the Moderna vaccine is expected soon. It, and Johnson & Johnson's vaccine, currently has emergency use authorization for those 18 and older.

A booster shot of the two mRNA  vaccines by Pfizer and Moderna are available for certain immunocompromised people.

The Delta variant has also been hitting children and younger adults harder than previous strains. Of the 71 patients hospitalized as of Tuesday, 17 were younger than 50, including four 20-29 year-olds. EAMC reported that seven patients under the age of 50 were on ventilators.

The Pediatric Clinic in Opelika set another record last week (Aug. 23-29), with 272 children testing positive for Covid-19. The clinic has been administering the Pfizer vaccine to patients, with 2,100 doses given so far to children ages 12-18.

Auburn City Schools reported on Sunday that during the week of Aug. 23-27, the school system reported 93 confirmed cases of Covid-19 to the Alabama Department of Public Health, with 109 students receiving notice of possible exposure at school.

Auburn University has reported 784 students have self-reported positive Covid-19 cases over the past two weeks (Aug. 16-29). The University has implemented a mask mandate indoors.