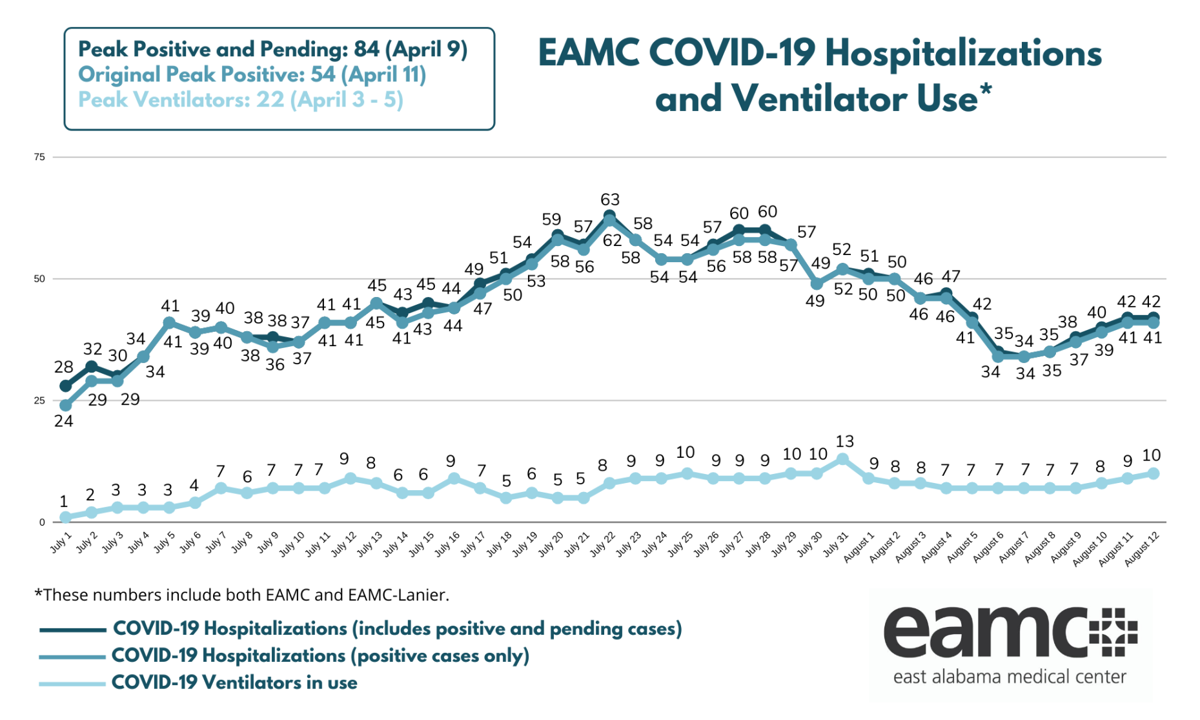 After falling over the past two weeks, the number of patients hospitalized with Covid-19 at East Alabama Medical Center has ticked slightly upward, while the number of confirmed cases in Lee County continues to climb, passing 2,700 this week.

EAMC's current hospitalization count sits at 41, down from a pandemic peak of 62 on July 22. The count hovered above 50 cases the second half of July before dropping to 34 last week. Lee County's current confirmed case count stands at 2,724, with 338 cases coming in the last 14 days. Deaths attributed to Covid-19 have also increased to 47, with four more deaths pending confirmation. Currently, 10 patients are on ventilators at EAMC and EAMC-Lanier.

The state of Alabama also passed a grim milestone on Wednesday, with the confirmed case count passing 100,000 and Covid-19 deaths reaching 1,814.

The uptick in hospitalizations at EAMC and EAMC-Lanier this week is nothing to be alarmed about at this point, said EAMC Marketing Director John Atkinson.

"This is with us to stay for awhile," said Laura Grill, president and CEO at EAMC, during a Chamber of Commerce virtual meeting on Tuesday.

Dr. Ricardo Maldonado, infectious disease specialist at EAMC, bemoaned the politicization of Covid-19, saying it has been difficult to deal with.

"The politicization of topic, to me, has been very hard for us because basically we're fighting two battles," he said. "We've learned a lot about this virus in the past eight months. However, we're still learning. You have to understand something — when we talk about the flu, we have studied the flu for decades ....We're eight months in, and we're still learning. We're working really, really hard to learn about this virus. It is very difficult. We have learned a lot, and there's a lot more to learn.

"Covid-19 is unlike anything we've ever seen."

One of the politicized topics with Covid-19 has been the wearing of masks to combat transmission, fueled in part by inconsistent statements from the World Health Organization and Centers for Disease Control and Prevention earlier in the pandemic and by politicians and activists touting mask mandates as a threat to personal liberty.

Brooke Bailey, infection prevention director at EAMC, had a simple message for those who doubt the efficacy of wearing a face covering — "Masks work."

Bailey noted that EAMC instituted a mask mandate in the hospital for all employees and visitors early on in the pandemic.

"We quickly saw how the transmission decreased," she said. "Our health care workers weren't getting sick.

"We continue to see as the number of ... staff that were taking care of our patients in our ICU, where they were the sickest of the sickest, and our staff were not getting sick, and it was because we were doing those infection control measures like wearing a mask and washing our hands and cleaning surface areas."

All face coverings may not be created equal, though. A study published last week in the peer-reviewed journal Science Advances evaluated the efficacy of masks in reducing the transmission of respiratory droplets during regular speech by using an optical measurement. It found that cotton masks approach the effectiveness of surgical masks in reducing the droplet count, while bandanas are less effective and neck fleeces, or gaiters, may be possibly worse than not wearing a mask at all because it breaks droplets into smaller particles that stay airborne longer.