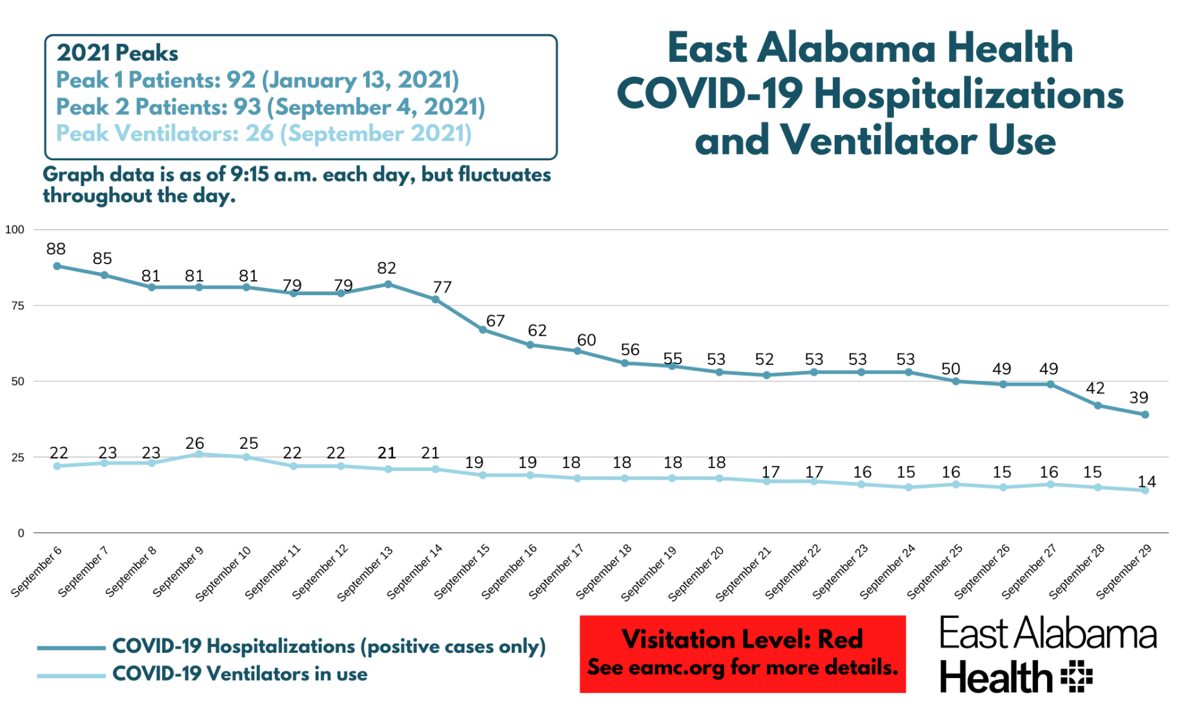 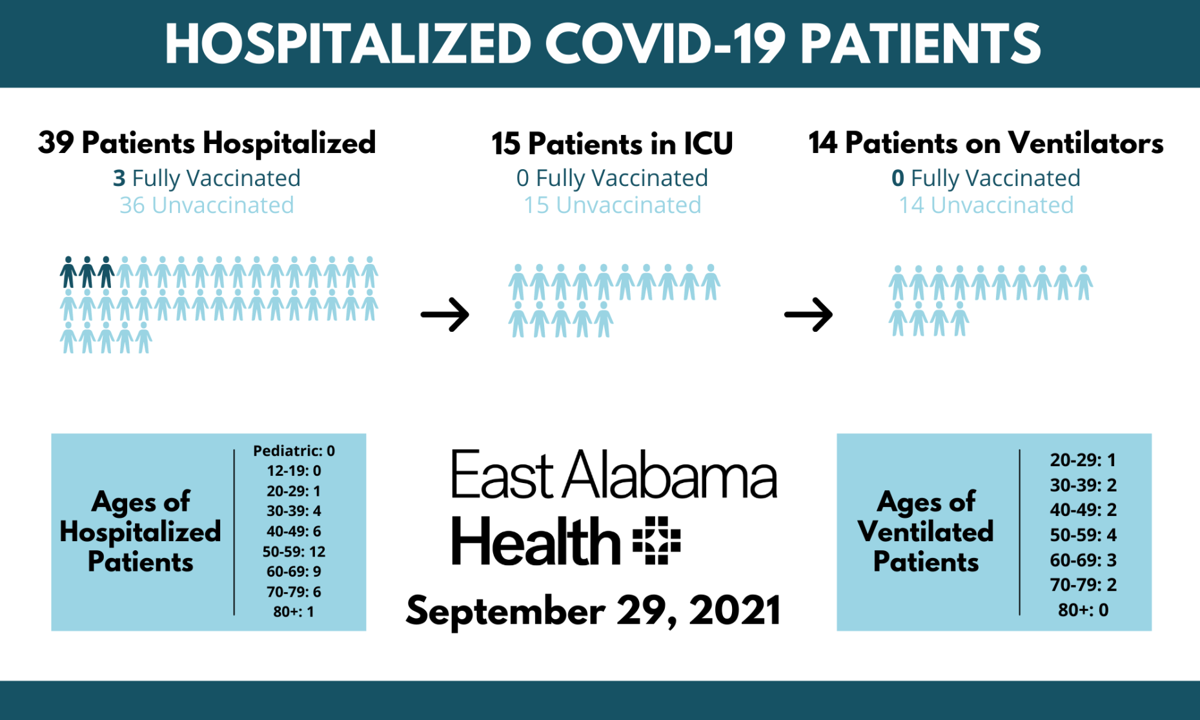 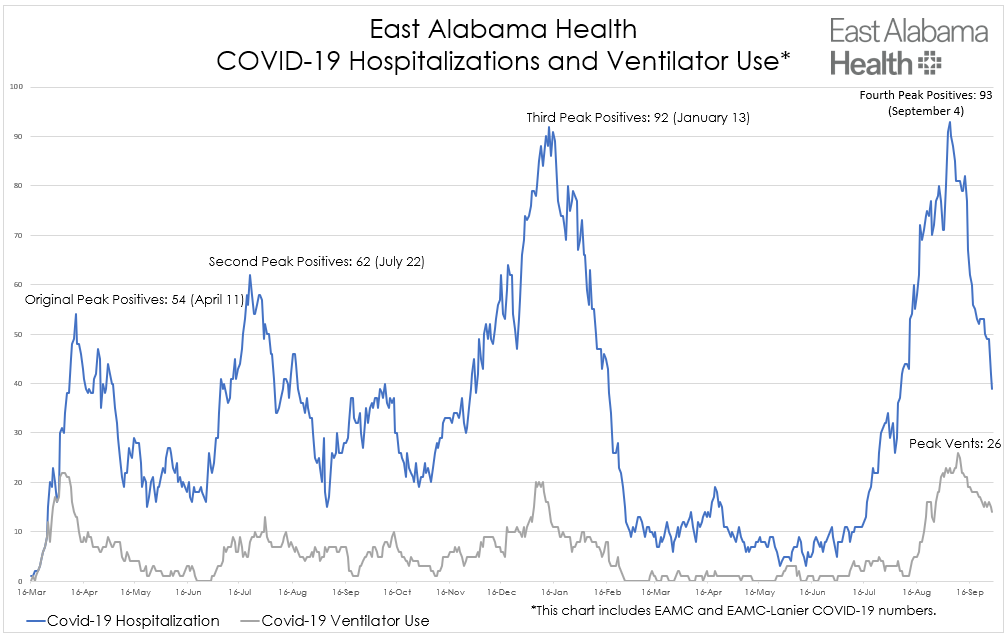 Covid-19 hospitalizations at East Alabama Medical Center and EAMC-Lanier continued to trend in the right direction over the past week, falling to a seven-week low on Tuesday as the surge sparked by the Delta variant appears to have peaked in the Auburn community.

As of Wednesday, 39 patients were hospitalized with Covid-19 between EAMC and EAMC-Lanier, well below the pandemic peak of 93 on Sept. 4.

In more anecdotal evidence that the pandemic has become one of the unvaccinated, only three of the 39 patients hospitalized at East Alabama Health's two campuses are fully vaccinated, while all of the 15 patients in the ICU and the 14 patients on ventilators are unvaccinated.

While hospitalizations at East Alabama Health are trending in the right direction, the state of Alabama is still registering a high number of cases and hospitalizations. As of Wednesday, 1,382 patients were hospitalized with Covid-19, according to the Alabama Department of Public Health. On Tuesday alone, the state had 40 confirmed Covid-19 deaths, bringing the 10-day total to 376.

In the Auburn area, pediatric Covid cases also continued to decline, with the Pediatric Clinic reporting its lowest positivity rate in two months (10.8 percent from Sept. 13-19 to 8.01 percent last week), according to a news release from East Alabama Health. The clinic's positivity rate peaked during the recent Delta surge at 20.4 percent the week of Aug. 23-29. The Pediatric Associates of Auburn office reported an even steeper decline in its positivity rate over the past week, dropping from 8.7 percent the week of Sept. 13-18 to 2.7 percent, marking the fourth-consecutive week the clinic's rate has been in single digits.

The road for a Covid patient in the ICU is quite bumpy, according to EAH.

"Once a patient with respiratory failure secondary to Covid has decompensated to the point where they require invasive mechanical ventilation, the battle is just beginning and the chances of winning that battle has decreased significantly,” said Dr. Meshia Wallace, a pulmonologist and critical care physician at East Alabama Health in a news release, who noted some measures that increase the length of stay of Covid patients in the ICU. “Positive pressure ventilation puts the patient at a greater risk for pneumothorax, so we may have to place a chest tube as well if this occurs. The ventilator itself can be uncomfortable and so patients are usually sedated. Many patients with Covid do not improve significantly after being placed on invasive mechanical ventilation and therefore we have to place them in a prone position (on their stomachs) to better help with oxygenation.”

After increasing during the recent surge, the number of Lee County residents seeking a vaccine has started to taper off. As of Tuesday, about 64,000 people had completed their vaccine series in Lee County, with about 75,000 having received at least one dose, according to ADPH data.

Those numbers could get a major boost soon, as Pfizer and BioNTech submitted data on Tuesday from its study of the vaccine in children ages 5 to 11, who received a smaller, pediatric dose, to the Food and Drug Administration. Pfizer said its vaccine is safe and effective for children in that age range in a news release outlining the study last week. The company is expected to make a formal request to the FDA for emergency use authorization in the coming weeks.