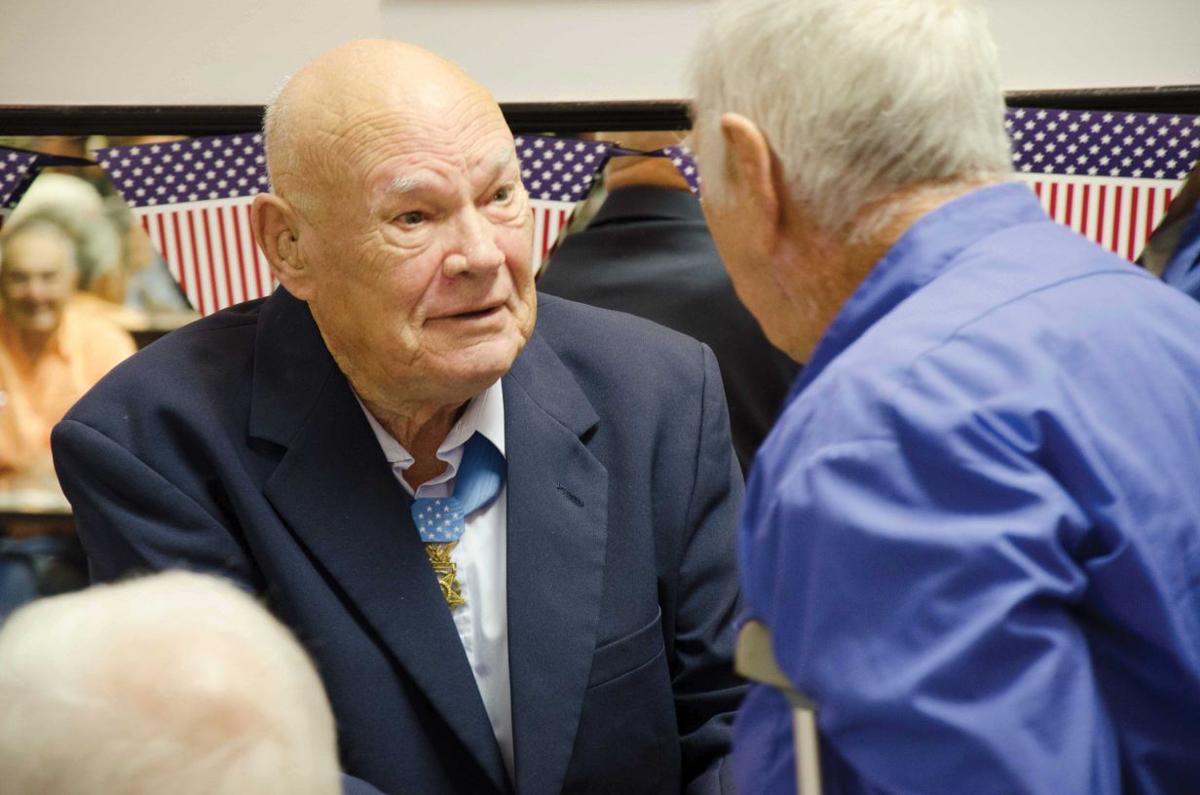 Bennie Adkins greets friends at a breakfast after his return from Washington D.C., where he was awarded the Medal of Honor. 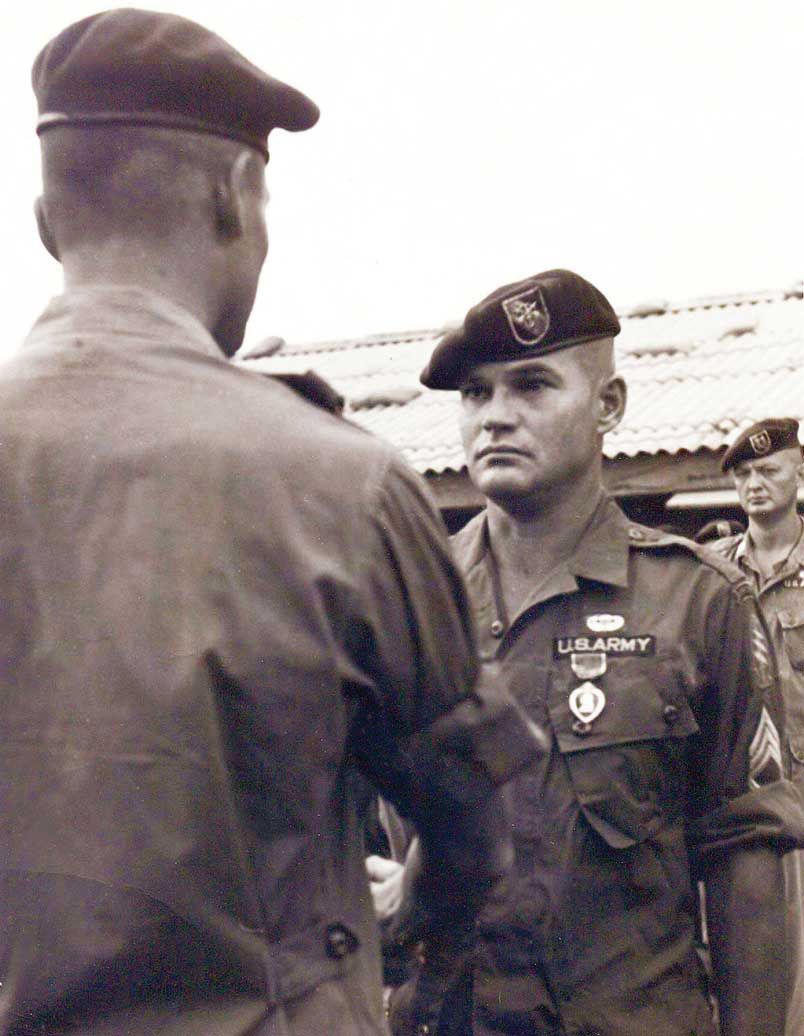 Adkins deployed on three tours during the Vietnam War.

Bennie Adkins greets friends at a breakfast after his return from Washington D.C., where he was awarded the Medal of Honor.

Adkins deployed on three tours during the Vietnam War.

Editor's Note: Auburn resident and Medal of Honor recipient Bennie Adkins passed away earlier this month from complications of Covid-19. The following article from 2014 recounts Adkins' experience in the Vietnam War.

The battle raged on for 38 relentless hours at the Special Forces camp in the A Shau Valley on the Ho Chi Minh trail, where troops and supplies were infiltrated from the north into South Vietnam.

Retired Command Sgt. Maj.  Bennie Adkins, then Sgt. 1st Class, and the 16 fellow soldiers of Detachment A-102, 5th Special Forces Group, 1st Special Forces, were on a mission in that mountainous jungle to collect intelligence and interdict the transportation of supplies.

“It had come down to even the point of hand grenade fighting,” Adkins says.

All of the 17 Green Berets were wounded during combat, with Adkins receiving 18 different wounds, and five of his fellow soldiers were killed during the battle.

Adkins was awarded the Distinguished Service Cross, the second-highest award for valor, at the time. In September, it was upgraded to the Medal of Honor in a ceremony at the White House, an experience that Adkins says was tremendous and humbling.

“I wear this Medal of Honor for the other 16 American, highly-trained Special Forces soldiers that were in the battle with me ... with special emphasis for the five who paid the ultimate price, that gave their life for this country, for the way that you and I live today,” Adkins said. “ I really don’t feel like I did any more than the others did for the country. Let’s face it—we were doing our job.”

When the battle started in the early morning hours on March 9, 1966, Adkins rushed through enemy fire to man a mortar position.

“I was blown from this mortar position on three or four different occasions, and all of my crew were killed,” Adkins says. “On another occasion, I went outside the camp to load an American that was severely wounded into a little fixed-wing aircraft. While I was out there, I was not only shot at by the North Vietnamese, but I was shot at by sympathizers within our camp itself.”

Later, Adkins narrowly avoided being killed while loading another wounded Special Forces soldier onto a second rescue helicopter after another had been shot down inside the camp.

“I went into this helicopter and looked at two or three of our friendlies who were not injured who wanted to take it out,” Adkins says. “In getting them off the aircraft, one of them locked and loaded on me, and happened so that he stood up in front of the door of the helicopter, and the North Vietnamese shot him and killed him through the helicopter. So it wasn’t my day that day.”

“I picked him up, put him on my shoulder, carried him back into camp, and while this was happening he was shot and killed on my back. I was slightly wounded through his body,” Adkins says. “I went back into the minefield again to recover some water. And during this time period, the North Vietnamese were having fun with me, and they shot holes in the water cans. I had a water can in each hand, and they shot holes in the water cans, so when I got back into camp I didn’t have much water.”

After withdrawing to the communications bunker and fighting off insurgents until almost all of the ammunition had been depleted, Adkins and Spc. Wayne Murray went into the mortar pit to retrieve some of the ammunition that he had carried in from the minefield. There, a North Vietnamese soldier wanting an American prisoner jumped on Murray.

“I was able to get this North Vietnamese soldier off of him, and get Wayne back into safety, and we continued fighting,” Adkins says.

After the battle had raged on for 38 hours, an evacuation of the camp was ordered.

Adkins says that of the 18 helicopters that were sent only eight landed, with 10 being shot down.

Not wanting to leave anyone behind, Adkins went back to get a wounded American soldier on a stretcher and missed the last evacuation helicopter.

“When we got to that point, there was no helicopters available, so I had to evade into the jungle. Shortly after there, Jimmy Taylor died in the jungle,” Adkins said. “During the escape and evasion, I had a little old FM radio with the antenna shot off it. I used my weapon standing in water, transmitting enough to speak with someone in a helicopter. The helicopter came in to pick us up. The helicopter was shot down. We had to go again.”

Adkins, a fellow American soldier and five Chinese Nungs, who were indigenous to the area and often employed as mercenaries, evaded capture for 48 hours.

During that time, they were chased by the North Vietnamese and surrounded on a hilltop in the jungle.

“All at once, we could hear a little noise and see eyes, and it was a tiger stalking us that night. They could smell the blood on us. This tiger stalked us this night,” Adkins says. “The North Vietnamese soldiers were more afraid of the tiger than they were us. They backed off, and we were gone again.”

After that, Adkins says they were able to cut a landing strip in the jungle and were evacuated by helicopter.

During the battle, Adkins fought off wave after wave of North Vietnamese soldiers, killing an estimated 135-175. Adkins says that of the 420 indigenous fighters at the camp, 110 were eventually recovered, most of whom were wounded.

Adkins, 80, was drafted into the military in 1956 from his hometown of Waurika, Oklahoma, where a statue is now planned for a park in his honor.

“I dropped out of college and was drafted in the military and I found that the military was something that I enjoyed,” Adkins says.

Adkins retired from the military in 1978 after leading training at Fort Sherman’s Jungle School in the Panama Canal Zone, and then moved back to the Auburn-Opelika area.

He then completed a bachelor’s degree from Troy State University in 1979, and then two master’s degrees in education and management.

He also taught classes as an adjunct at Southern Union and Auburn University and started Adkins Accounting Service on South Gay Street, which he ran for 22 years.

Now, Adkins is traveling around the country to teach others about patriotism.

“Pass along to all the veterans that I wish them a nice Veterans Day, and the kindest regards,” said Adkins, who will be recognized at Jordan-Hare Stadium prior to Saturday’s game.