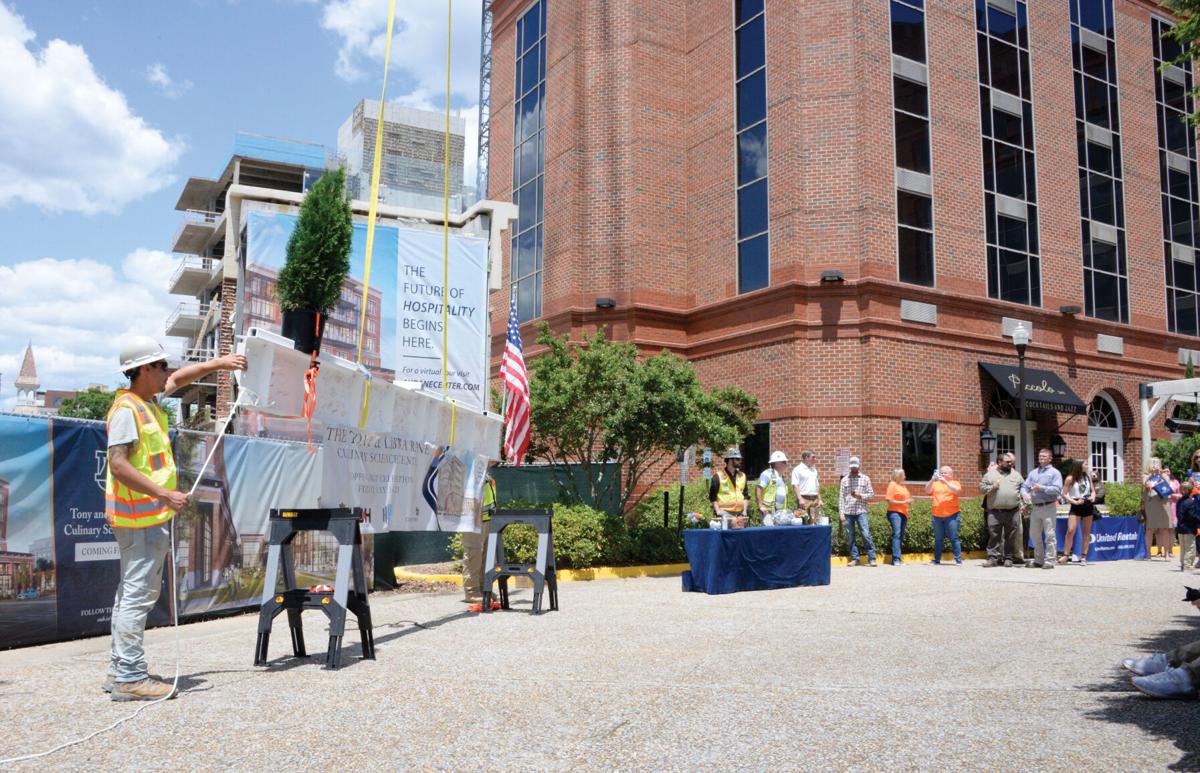 Construction workers with Bailey Harris prepare the last beam to be hoisted for the Tony and Libba Rane Culinary Science Center, pictured in the background, at a Topping Off ceremony last Friday 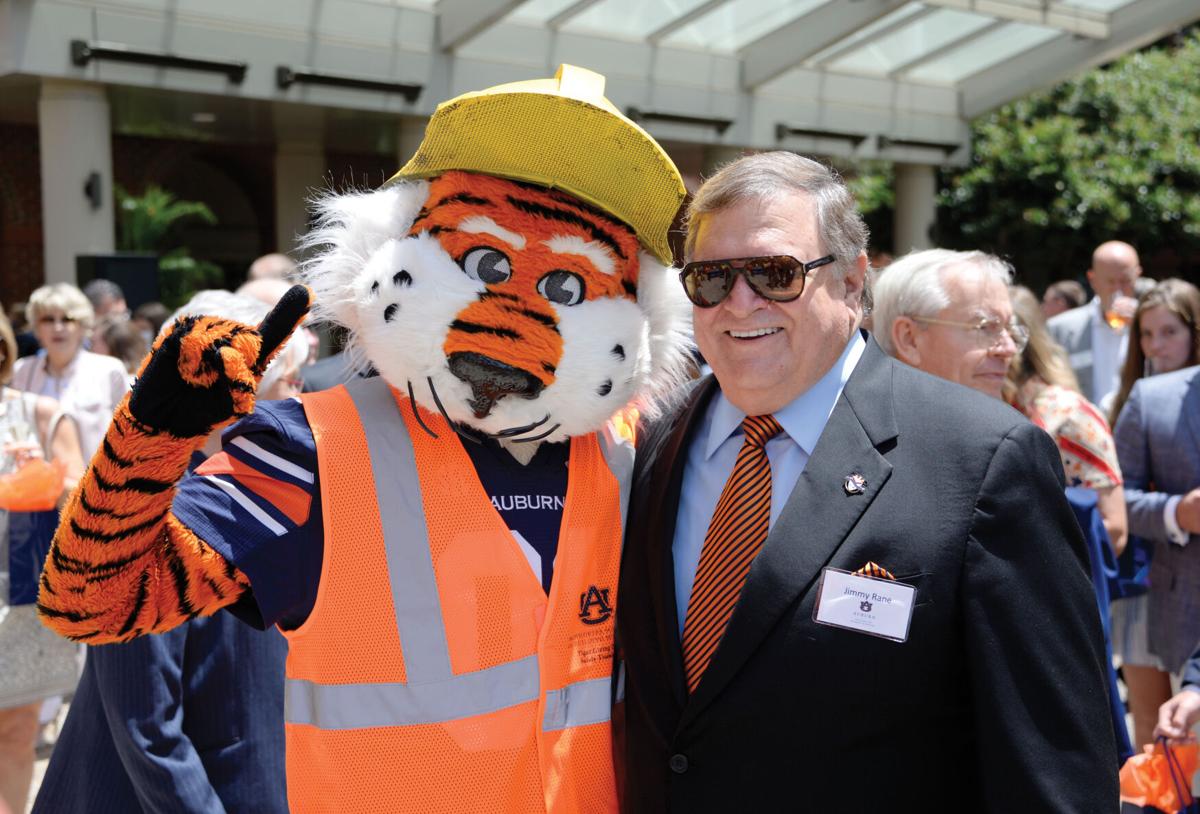 Aubie takes a moment to pose for a photo with Auburn University Board of Trustees member Jimmy Rane, the lead donor for the university’s Tony and Libba Rane Culinary Science Center, which is named after his parents 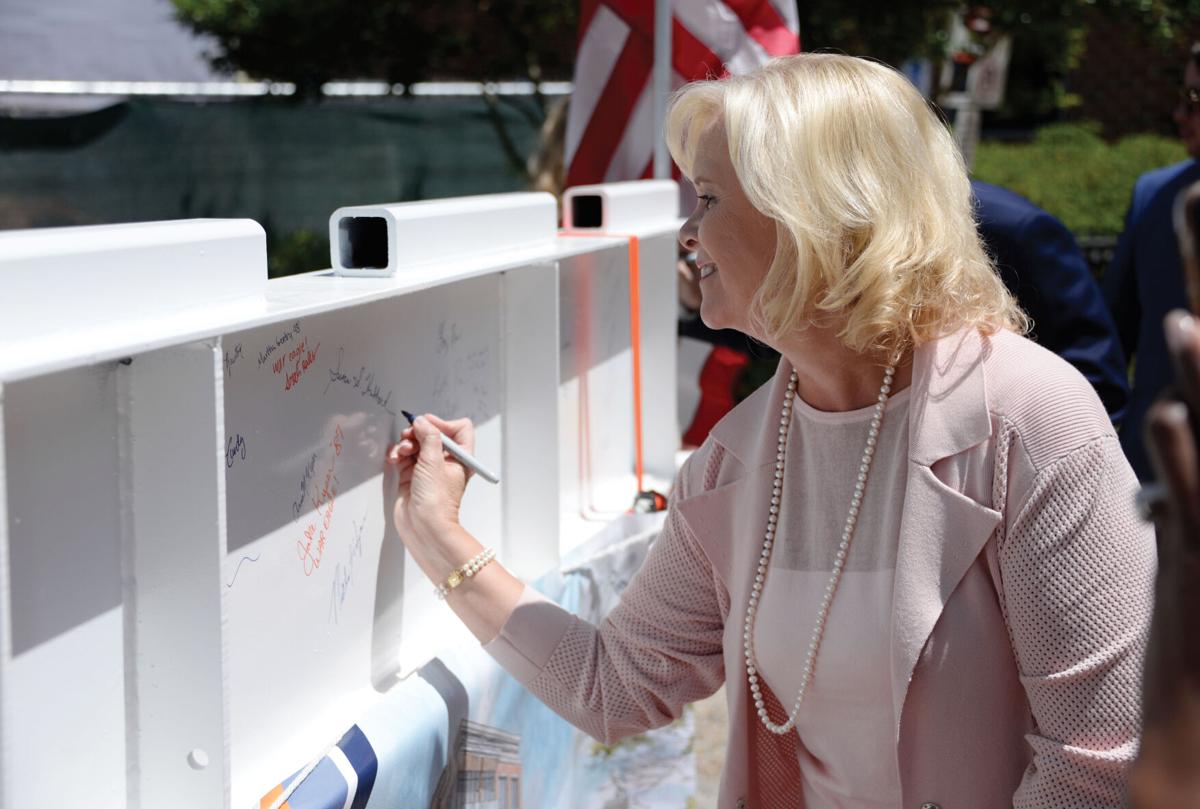 Susan Hubbard, dean of the College of Human Sciences, signs the beam before it’s hoisted to top off the Rane Culinary Science Center

Construction workers with Bailey Harris prepare the last beam to be hoisted for the Tony and Libba Rane Culinary Science Center, pictured in the background, at a Topping Off ceremony last Friday

Aubie takes a moment to pose for a photo with Auburn University Board of Trustees member Jimmy Rane, the lead donor for the university’s Tony and Libba Rane Culinary Science Center, which is named after his parents

Susan Hubbard, dean of the College of Human Sciences, signs the beam before it’s hoisted to top off the Rane Culinary Science Center

A crowd of onlookers holding champagne flutes toasted, and the final beam was hoisted to top off the Tony and Libba Rane Culinary Science Center in a ceremony last Friday, a milestone in the construction of a center that is expected to make a large impact on Auburn University, the Auburn community, the state of Alabama and the hospitality industry, in general.

Accompanied by many in his extended family, the lead donor and Board of Trustees member Jimmy Rane said he was inspired to make his $12 million donation for the project, in part, because of his father, Tony, the son of an immigrant from Sicily who was in the restaurant and hospitality business.

“He loved cooking and entertaining and hospitality,” said Rane. “He expressed himself through his cooking and his food.”

Rane added that he was further inspired by idea of contributing to the culinary science center by Hans van der Reijden, managing director of The Hotel at Auburn University and Dixon Conference Center, who joined Martin O’Neill, head of the Department of Nutrition at Auburn, to benchmark other culinary programs.

“Hans had a vision, and he was so passionate about it, and he reminded me of my father,” said Rane, who thanked Auburn University for changing his life as the first member of his family to earn a college degree. “Hans expresses himself through hospitality, period. And so I wanted to help him see his vision come true, and I felt at the same time it would be something my dad would be pleased about.

“If it just gives some young person — like my dad when he first started out —if one person gets the chance to really change their lives and inspire them to do something good for everybody, it will be worth it. And I think it will be more than one.”

Van der Reijden said it was humbling for Rane to say he was inspired by him.

“It would have never happened without the Rane family and their generosity and the leadership at the university and the Board of Trustees to understand and see the possibilities of this and what it’s going to do for the area,” he said. “This is not just Alabama. This is going to have such a wider impact.

“It feels absolutely amazing to see a vision that was laid out 12 years ago come to completion in terms of the building and topping it off.”

The Rane Center, expected to open in the fall of 2022, will provide students in Auburn University’s hospitality management program a multitude of opportunities for hands-on learning in the center’s luxury hotel rooms and its teaching restaurant and brewery.

“Now, the real hard work starts in getting the doors open and creating the most exceptional experience for both our students, our university, our community and the hospitality world at large  because I do believe that this will not only impact our area — this will have a national and most likely international impact,” said Van der Reijden. “It’s a new way in terms of looking at hospitality, culinary education, and I love the fact that Auburn has had such an incredible vision to pull this through and it to come to this.”

O’Neill, head of the Department of Nutrition at Auburn, said placing the beam on top of the Rane Center was like the “realization of a dream.”

“Programmatically, it’s just phenomenal because we’re about to set a new standard educationally with hospitality education, not only nationally, but also internationally,” he said.

The Rane Center, located on the corner of Thach Avenue and South College Street across from the university, is expected to have a major impact on the Auburn community.

“This has so much to offer for our community,” said Van der Reijden. “And with our chef in residence program, we’ll have a different chef here every year. It’s going to change the food scene in Auburn. And it has in every other city where there has been a culinary program started.

“This can only work if it’s not only supported by Auburn University but supported, frequented, visited, by our community. We want our community to be the champions for this center.”