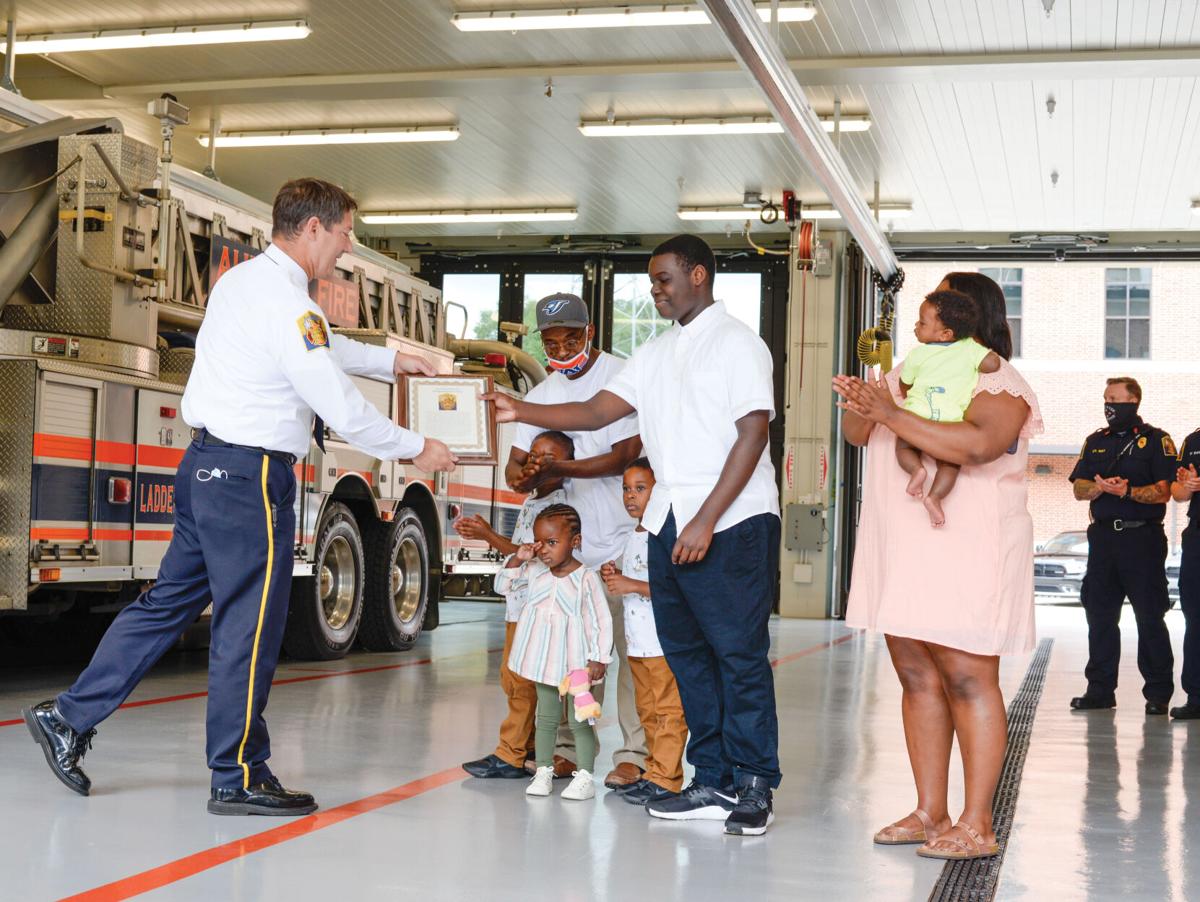 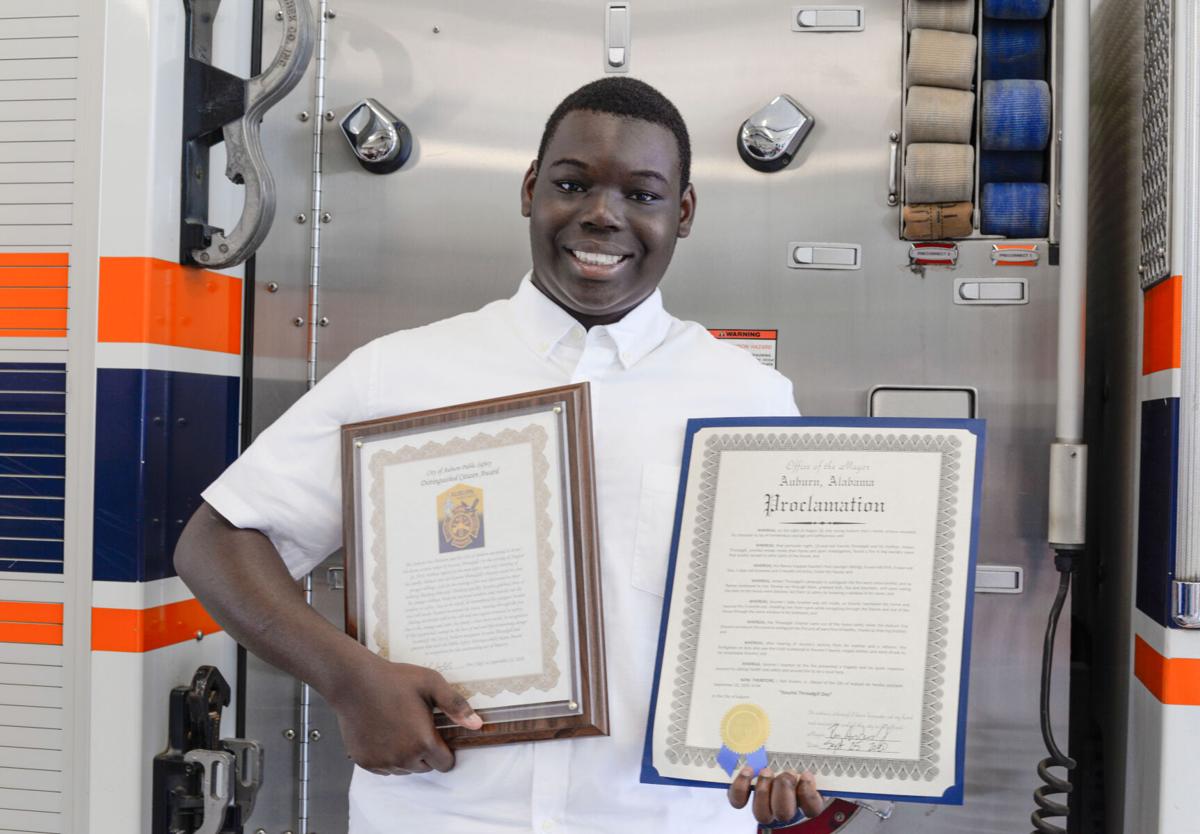 That day, Kounte and his mother, Amber, watched as fire began to overtake their former home on Harmon Drive, trapping his four younger siblings inside with no way to escape. Kounte made a split-second decision that would change the course of his life, save his siblings from perishing in the inferno and earn him the title of child hero among his local hometown community.

Kounte ran through the fire.

As the house became engulfed in flames from the fire that started in the laundry room, Kounte ran through his siblings' rooms, jerking them awake as he simultaneously carried them in his arms through the thick smoke that began to overwhelm every part of the house. He quickly ran to his room, broke the window and, one-by-one, pushed his siblings through, allowing much-needed oxygen to run through their smoke-filled lungs.

By the time Auburn Fire Division arrived, Kounte had successfully and bravely saved each of his four siblings from harm's way — all while citing that he had only forgotten his calculator as he ran out the house.

“Kounte loves math and science,” Amber said. “What the fire didn’t take, the water from the hoses took and what that didn't take was damaged by all the soot.

After the fire, the tale of the boy hero made its way through the Auburn community and the “family” unit that the Plains is most praised for began to pitch in as the Threadgills began to transition into a new and difficult chapter in their lives.

“I want to thank God first and foremost for touching my family and allowing all of us to walk out that house unharmed,” Amber said. “I want to thank Auburn Early Education Center and Auburn Junior High School, Sun Storage, Jen Thurow, the Meyers family, Ms. Dionne Whitt, Ms. Brittany Handley and Ms. Terri Huffman.

“And we want to give the Auburn community as a whole a very special thank you for donating clothes, shoes, diapers, gift cards and so much more.”

Despite his heroic efforts, Kounte simply wanted one thing as a gift for doing what many saw as impossible- a Texas Instruments TI-84 Plus graphing calculator.

“It would allow me to take my skills to the next level,” Kounte said. “And catch up on my homework faster.”

As word spread and the smoke settled, the Auburn community and others continued to give.

Texas Instruments reached out to the Villager and Kounte to give him the uniquely high-tech calculator manufactured by them.

Last week, Mayor Ron Anders and the City of Auburn proclaimed Sept. 25, 2020 as Kounte Threadgill Day, and honored him with the City of Auburn Public Safety Distinguished Citizen Award in a ceremony held at the city's new Fire Station No. 1.

Flanked by his family and four siblings, Kounte accepted the award to applause from firefighters in attendance.

Kounte, the boy who ran through fire, recalls how the day began as normal but by the end, he felt the high praise he was given.

“It feels amazing. When they called me here, it didn’t feel like anything,” Kounte said. “But when people started calling me hero over and over again, it made me feel really good.”

Amber Threadgill, Kounte’s mother, sees the situation as a blessing, thanking God for the safe return and heroic efforts of her eldest, Kounte.

“I’m very grateful that he’s getting the recognition that he deserves because I don’t think he knows the gravity of the situation, like he saved his entire family,” Amber said. “Because if anything were to happen to his siblings — like he even took a chance going back in there rescuing them.

“Without our kids — my life is my kids. And I’m just beyond grateful.”

As for Kounte, a month later and more famous than he was in his past life, he still carries his humble and quiet aura — ensuring all that he is still the 13-year-old boy who simply loves math and his family.

Recalling the day that fate led him to make the decision of a lifetime, Kounte is still in awe, himself. However, in his quiet but sure voice, he reminds all that his decision was as simple as any he has ever made — for him, it was natural.

“It's just quiet, but it was loud at the time,” Kounte said. “Everything is in slow motion when I replay it.

“Everything was super-speed. It was instinct, I guess."