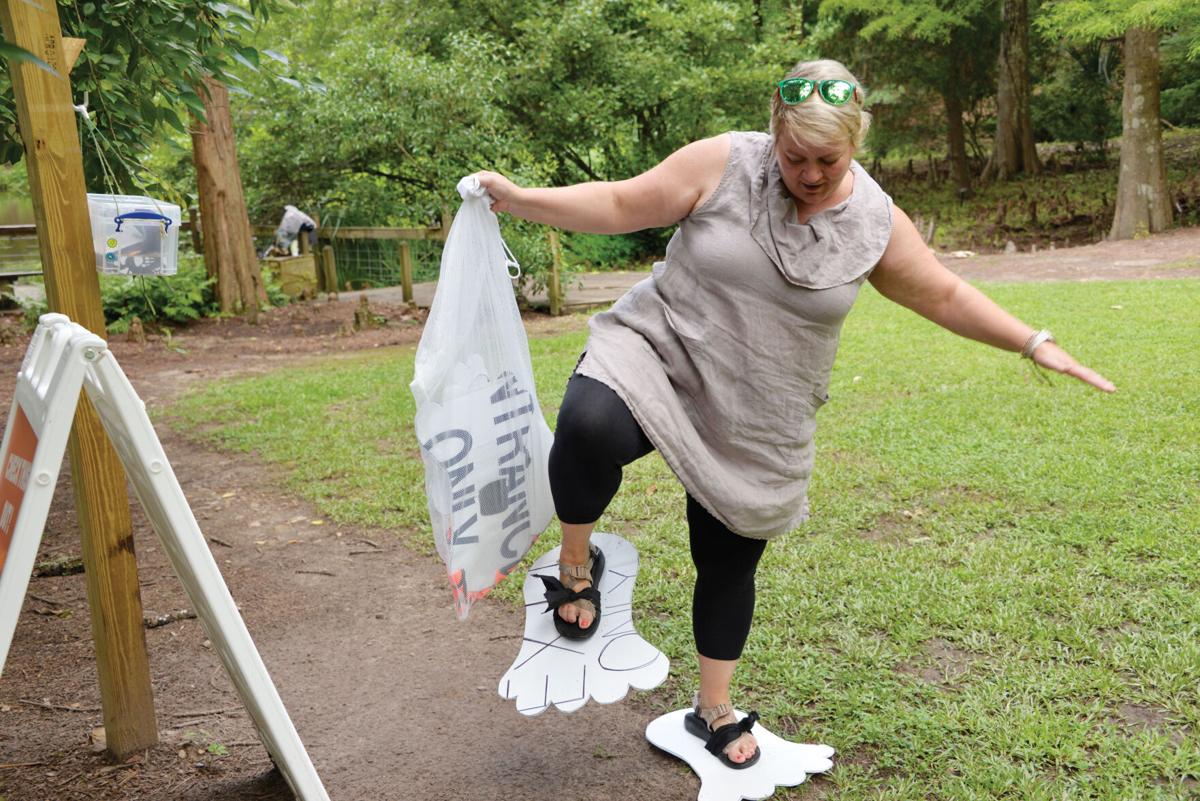 Morgan Pendergrass, director at the arboretum, demonstrates some of the fun to be had in the Hunting Bigfoot game 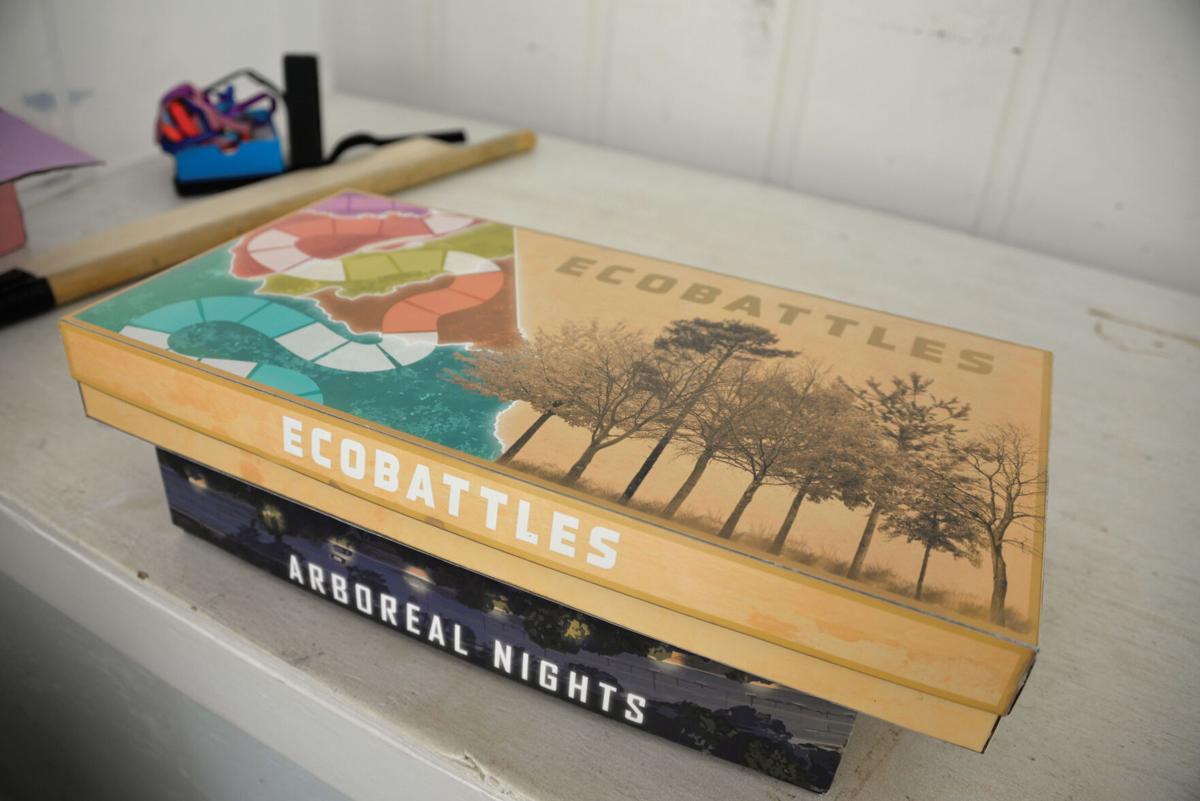 Ecobattles and Arboreal Nights are two games featured at the arboretum 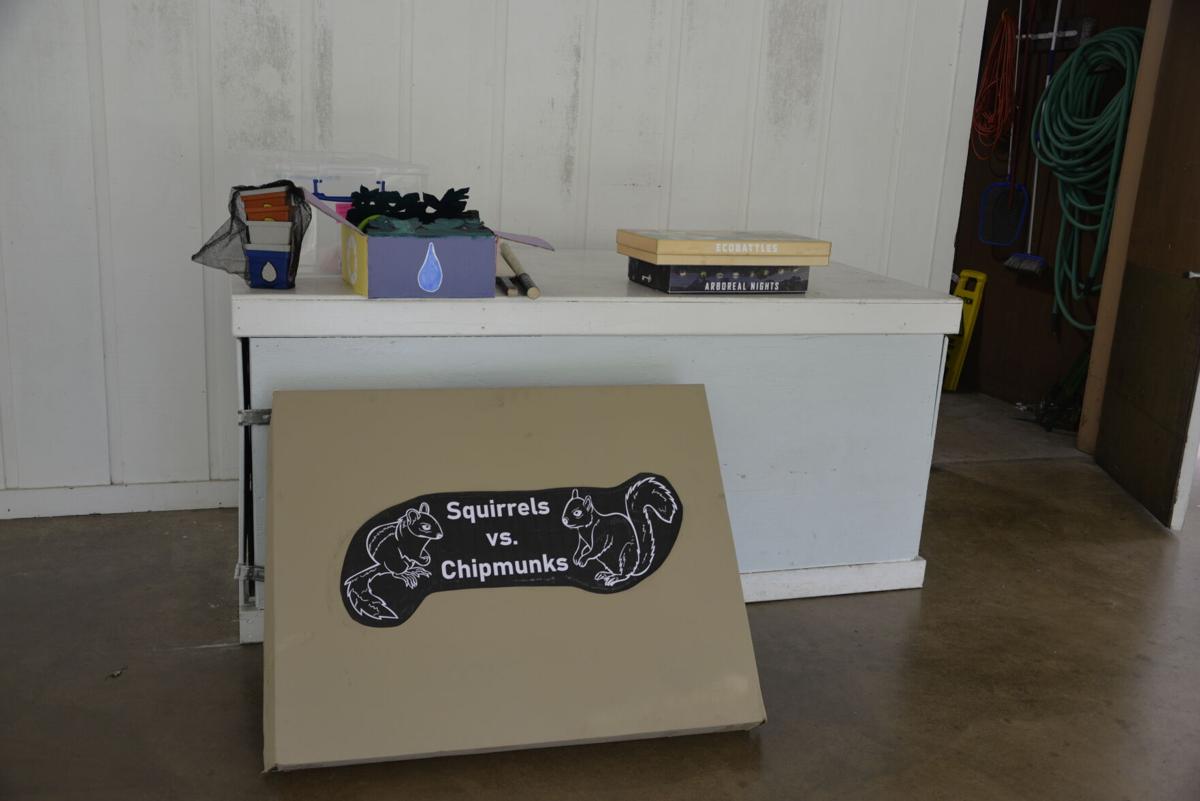 The students were responsible for coming up with all aspects of the games, from the concept, to the design, to the instructions and rules 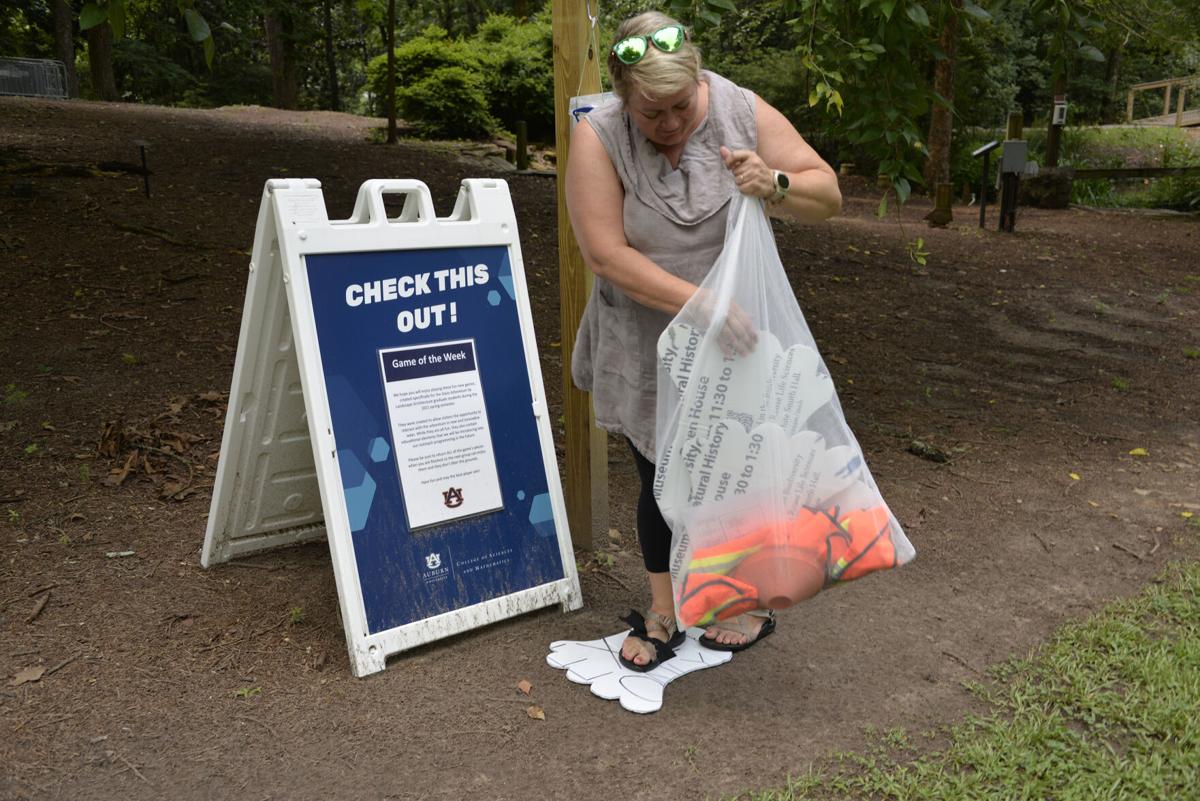 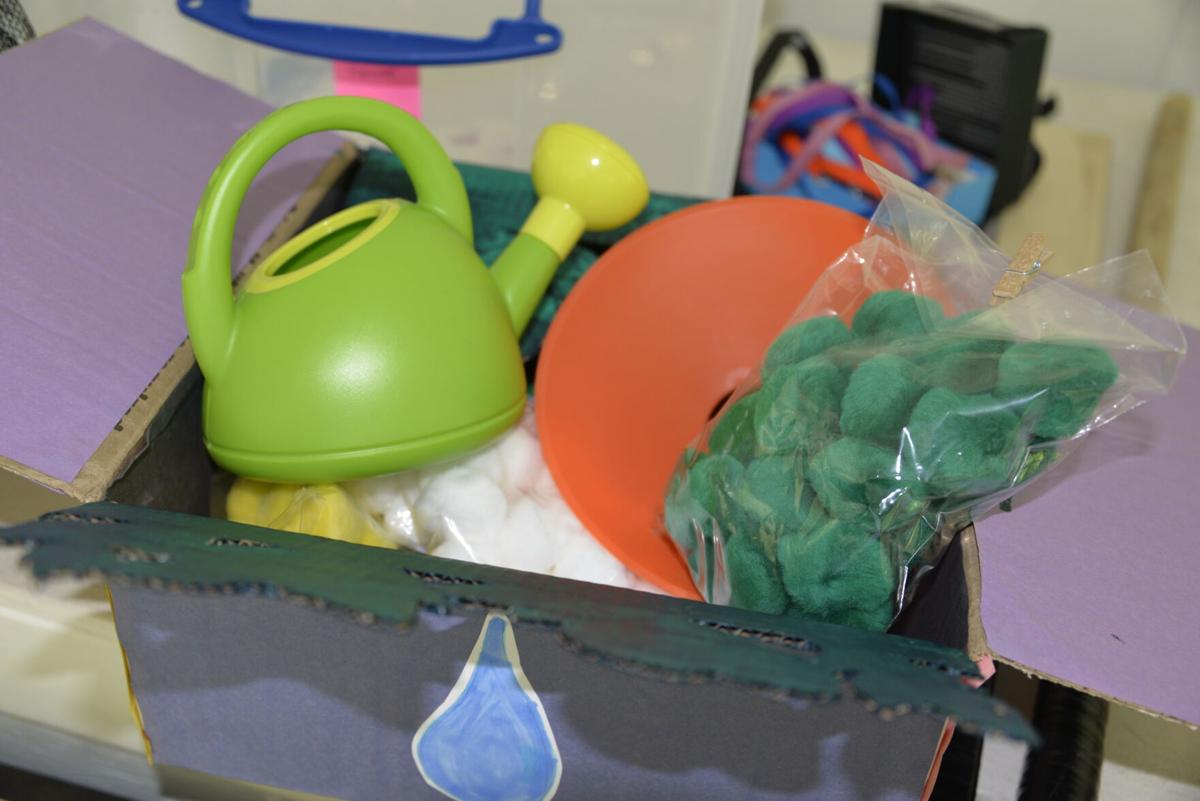 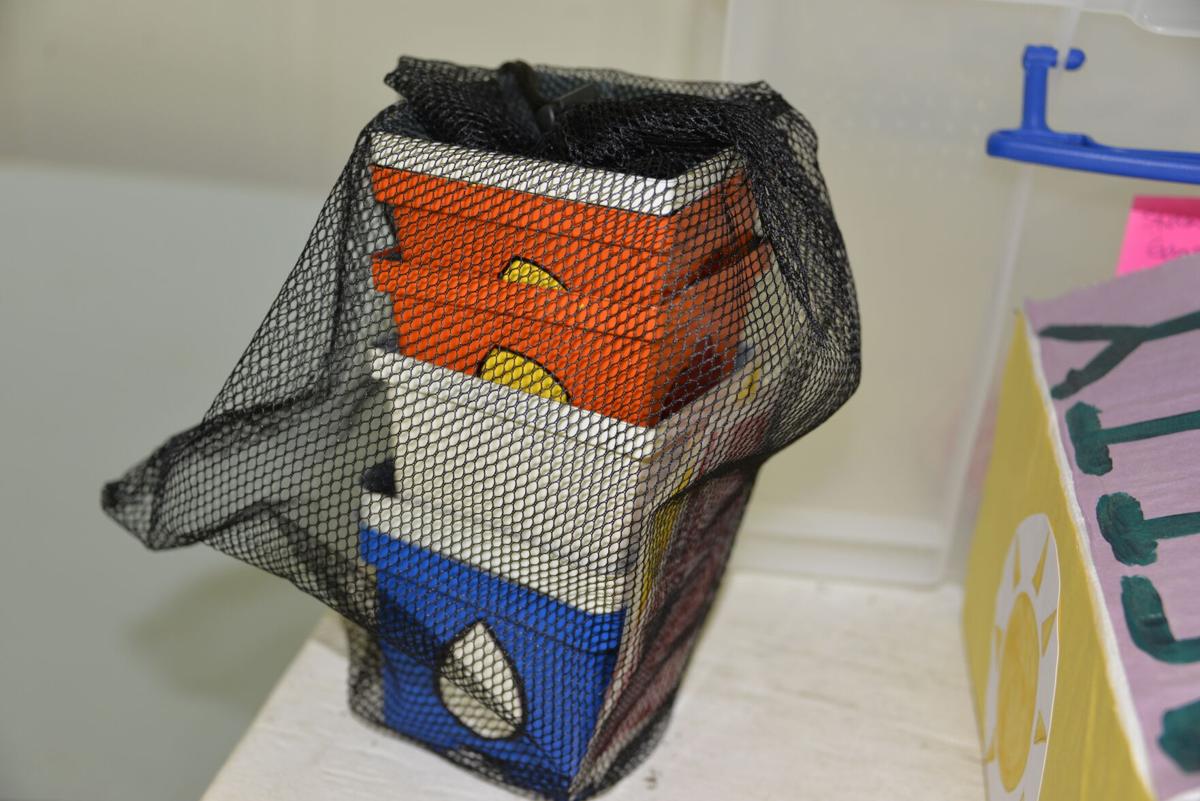 Those visiting the Donald E. Davis Arboretum this summer will find more than just plants native to Alabama and the Southeast. They also will find educational games that are fun for the whole family.

Designed by Landscape Architecture graduate students, the games allow visitors to interact with the arboretum in new and innovative ways while also teaching them things about nature they might not have known.

“The arboretum is probably one of our best kept secrets on this campus. There’s always something new in bloom, something new going on,” said Charlene LeBleu, a professor of Landscape Architecture in Auburn University’s College of Architecture, Design and Construction. “I thought this might help get more people interested in going to the arboretum.”

The students who designed the games participated in a graduate seminar in design communication, which took place during the Spring 2021 semester.

Each student made an individual game and worked in teams to create two board games.

“There were seven graduate students in the class, and their objective was to look at interpretive design through the lens of communication,” LeBleu said.

The students were responsible for coming up with all aspects of the games — from the concept, to the design, to the instructions and rules — and also tested the games to make sure the objectives and rules were clear.

“They really did a good job,” said Morgan Pendergrass, arboretum director. “They are really creative games.”

The students spent January through March researching, planning, discussing and testing their games.

“They created everything,” Pendergrass said. “Even the boxes.”

The games are available to the public. Pendergrass keeps the board games in the arboretum’s office. The individual games can be found in the office or by the pond. A sign by the pond that details the project is where Pendergrass puts the featured games of the week.

Hunting Bigfoot, one of last week’s featured games, is a tag game where players try to capture Bigfoot. The player chosen to play Bigfoot wears large, handmade Bigfoot feet, which were crafted out of old plastic signs.

“How do you even walk like that?” Pendergrass said. “This is hilarious.”

Pendergrass switches the featured games about once a week. She tries to pick different styles of games so visitors have some variety. Having more than one game also gives more people the opportunity to play.

The arboretum hosts various groups from schools, home schools, camps, daycares and clubs throughout the year.

Because the games were designed for larger groups of players, up to eight or more, they will give the arboretum something different to do with those groups.

“We’ve played a couple of these with some different camp groups that have come through this summer, and the kids had fun playing them,” Pendergrass said. “Some of them are really active and require a lot of running and back and forth, and some of them are slower paced, but still competitive. We’ve had a lot of fun watching the kids play some of these games.”

The games also highlight all the work students do for the arboretum.

“This is just another fun aspect to show how we’re part of the university, and the good things that these students really do for us specifically,” Pendergrass said.

Dustin Elston, who created the Kingfisher game, thinks it’s awesome the games he and his classmates made are being used at the arboretum.

“The relationship between our class and the arboretum meant that we could benefit from having a real-world application of our design work while the arboretum benefitted by having new attractions for their guests,” he said.

Pendergrass said the games will be available through the summer, but could be around longer as long as there’s interest.

People can call the arboretum if they would like to reserve a game for a particular event.

“We were going to run them for the summer, but if we see an interest in them throughout the year, I would definitely leave them up just ’cause they’re fun and give people something else to do,” Pendergrass said. “I thought for the summer while kids were out of school, especially if there’s groups that get together, they could come and picnic and the kids could play while the parents chat. I didn’t really have a long-term plan past the summer, but I’m open to anything.”